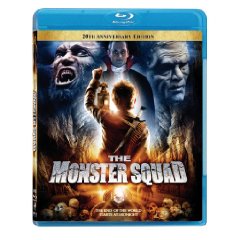 Count Dracula adjourns to Earth, accompanied by Frankenstein’s Monster, the Wolfman, the Mummy, and the Gillman. The uglies are in search of a powerful amulet that will grant them power to rule the world. Our heroes – the Monster Squad are the only ones daring tostand in their way.

The Monster Squad is a kid’s film at heart, but it doesn’t come off as if it were written and directed down to children. The Monster Squad is like The Goonies, but with your favorite Universal monsters. Monster Squad follows a group of kids who call themselves, The Monster Squad. They gather in a treehouse to discuss all things monster, and fear walking by Creepy German Guy’s house. When the squad realizes that monsters are real, and are looking for a stone to begin world domination, they do everything to stop the world from being taken over. Even if it requires the help of Creepy German Guy.

The best thing about The Monster Squad is the monsters. All of your favorites from the classic Universal movies are here. Dracula (portrayed wonderfully by Duncan Regehr) and his “brides,” the Werewolf, the Creature from the Black Lagoon, the Mummy, and the all-time favorite, Frankenstein. I really like how they decided to portray ol’ Frank as a gentle monster confused in his situation. The bond he shared with the little girl in the movie was also great, and made a tearful moment near the end of the movie. Oh, the ending. That’s what really makes this movie a treasure. The final showdowns are always the best, but this one really shows how a final showdown should be done. If you’re a fan of The Goonies and the Universal monsters, then check The Monster Squad out.

Shane Black’s gift for balancing humor and action, later utilized in the Lethal Weapon series, leaves the greatest mark on the film. The massive cult of Monster Squad finally received a DVD release in 2007, nearly 10 years after the release of the format. I would say that us Blu-ray format owners and fans of the film should be happy that we get this released within a few years of the format.
Movie Quality: 9.5/10

The print is presented in 1080p/AVC MPEG-4 with a 2.35:1 aspect ratio. This Blu-ray transfer appears to be the same transfer that was used for the DVD version released back in 2007. I am glad to see this film arrive on Blu-ray, yet disappointed to see the same issues that plagued the DVD plague the Blu-ray. Colors are strong as this is the best the film has ever looked. Colors do not pop off the screen, but they are vivid and consistent. Black levels are not as deep as one would have expected considering that there are many night scenes in this film. White specs throughout the entire film are still present. Grain is present yet kept at a minimum. Like the DVD release back in 2007 I feel that a lot more could have been done to clean up some of these issues.
Video Quality: 7/10

The audio is presented in DTS-HD MA lossless 5.1 mix. The audio mix had me a bit underwhelmed due to the lack of effects into the soundfield from the rears. Much of this sound design is front heavy and a lot of that has to do with the low budget of the film. Dialogue is front and center, clean and crisp, yet I felt that it could have been a bit louder as I had to raise the volume beyond norm of my receiver.
Audio Quality: 7/10

‘The Monster Squad’ is one of my favorite films from my childhood. With the DVD release having been released back in 2007 and now 2 years later this film makes its debut on Blu-ray. The video and audio presentation is a bit on the underwhelming side, albeit being the best the film has ever been on home video. All of the special features are ported here from the 20th Anniversary DVD release. If you are a fan of ‘The Monster Squad’, you owe it to yourself to purchase this film on Blu-ray.
Overall Rating: 7.5/10