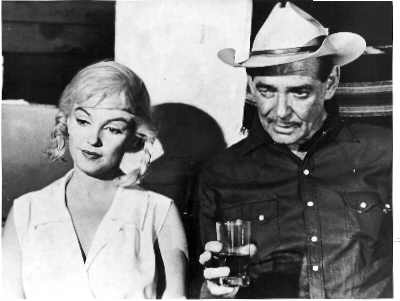 It was the last roundup for Clark Gable and Marilyn Monroe, who gave their final performances in this melancholy modern Western. Arthur Miller wrote the script (some say overwrote) as a contemplation of his then-wife, Monroe, and set the piece in the half-world of Reno, Nevada. The dangers of this kind of meta-fictional approach are not entirely avoided, but the clean, clear-eyed direction of John Huston keeps the film grounded. And then there are the people: Gable a warrior past his time, Monroe overwhelmed by the world and its attentions, Montgomery Clift visibly broken in pieces, Eli Wallach a postwar neurotic. If the encroaching mortality of Gable, Monroe, and Clift weren’t enough, the stark photography and Alex North’s score confirm this as a film about loss. It may have its problems, but seen at a distance of many years, The Misfits scatters its tender mercies with an aching beauty. 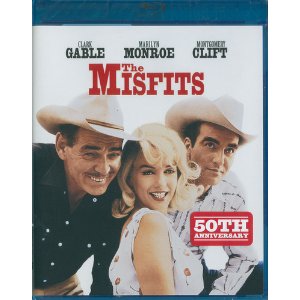 As the story opens, lost-soul Roslyn (Marilyn Monroe) has just arrived in Reno to get a quickie divorce. She meets Guido (Eli Wallach), a sensitive mechanic and his pal Gay (Clark Gable), an aging cowboy. Both men fall in love with her and she ends up living with Gay in Guido’s house. The men take Roslyn out the desert to go “mustangin’,” but she’s horrified when she learns the purpose of their trip.

This story is about four aimless and rather pathetic people who have nothing to do and no place to do it in. They’re just drifting through life and for a short time, they drift together. Gable is outstanding as the rugged old cowpoke who still wants a woman’s touch. He takes manly command of every scene and is charisma personified. Wallach’s role is less flashy but still powerful and touching. Montgomery Clift plays a rodeo cowboy who’s been kicked in the head one too many times. He doesn’t get to do much but he’s still sweet and likeable. Marilyn is, well, Marilyn, still delivering her lines in that breathy, little-girl voice. Only occasionally does she break through and become a real person; mostly she over-emotes and poses prettily.

Filmed in black and white in a mostly barren desert, the movie is grim and depressing and doesn’t let up for a minute. (Animal lovers’ note: The “mustangin'” scenes of wild horses being roped and hog-tied are brutal.) I’m glad I got to see Gable and Monroe in their last performances; this is a thoughtful character study of four achingly lonely people.

The print is presented in 1080p/AVC MPEG-4 with a 1:66:1 aspect ratio. MGM has done an excellent job with the restoration of ‘The Misfits’ on Blu-ray. I will say that this wave of Blu-ray releases have been better handled than the previous wave of titles. The black and white image looks absolutely stunning for a film of its age. Clarity and Sharpness is a top level showing off the beauty of this transfer. There is no DNR or EE to worry about in this film. There are some minor issues with this print with some white specs throughout. You will not be disappointed at the least bit if you are a fan.
Print Quality: 9.5/10

The audio is presented in a DTS-HD Master Audio Mono mix. MGM was very smart here to just take the mono track and give us a lossless mix instead of trying to make this into a 5.1 mix. With this film being dialogue centric do not expect your soundfield to be booming throughout the entire film. Dialogue comes through the center channel very clear and crisp.
Print Quality: 9/10

Marilyn Monroe and Gable at their best in a screenplay by Arthur Miller and direction by John Huston. Montgomery Clift, Thelma Ritter, and Eli Wallach at the height of their craft. Some epic Miller lines like Wallach saying he was blind bombardier in the war, killing people he never saw, and Monroe saying that if she was going to be alone, she would be by herself.
Overall Rating: 8/10