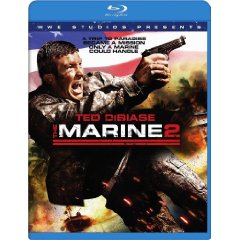 WWE wrestler Ted DiBiase Jr. stars as Joe Linwood, a marine sharpshooter who goes with his gorgeous wife to a beautiful tropical resort–but when terrorists take his wife hostage, Joe leaps into action! There’s no simpler way to describe it: The Marine 2 (which has almost nothing to do with The Marine beyond the title) is Die Hard on a tropical island. And as such, it’s pretty good. The cinematography captures the luscious landscape and crystal-clear waters; the action scenes are punchy and propulsive; the villain, played by Temuera Morrison (probably best known as Boba Fett in the Star Wars prequels, but he first made his mark in the compelling Once Were Warriors), is suitably intimidating; and DiBiase may not be emotionally expressive, but he’s a solid hunk of muscle. Michael Rooker (Henry: Portrait of a Serial Killer) hams it up as an ex-soldier turned scuba guide who gives Joe a hand when the chips are down. Pitch your expectations appropriately and The Marine 2 will provide solid action entertainment.

I have to admit that I literally came in with low expectations with this film because even though Ted DiBiase Jr. is one of my favorite WWE heel superstars. Originally Randy Orton was to play in this role, but when his injury struck Dibiase filled his shoes and did a very good job. This has to be one of the better WWE films in recent years and better than most WWE films that have been released in theaters. If you enjoyed the first ‘Marine’, well this one is much better.

I actually was impressed with DiBiase Jr.’s performance. It helps that he’s a newer wrestler because he has not suffered career threatening injuries just yet, he’s very mobile, quick on his feet and not as rigid when it comes to the fight scenes. I know this film was originally planned for Randy Orton before his injury but for his first acting role, DiBiase, Jr. did a wonderful job. I think that Dibiase did a better job than Orton would have done. I was entertained from start to finish and this film reminds me a lot of the older 80’s action films.
Movie Quality: 8.5/10

The print is presented in 1080p/AVC MPEG-4 with a 1.85:1 aspect ratio. Color is vibrant and bold in this transfer. A very good example of that is the color red, when blood splats on the floors, walls, and in the air. The film is so colorful that it is very good in details. There are also moments though where the transfer does lack in a few areas. Lighting was a problem in a few scenes where there appeared to be too much light in the background. This transfer is pretty good for a DTV release, but at times this does come off as a film that is DTV.
Video Quality: 8.5/10

The audio is presented in DTS-HD MA lossless 5.1 mix. This is an excellent mix that could easily sell those on the fence about the format based on a DTV film. The soundfield is immersive at all times no matter if it is the special effects or dialogue. I was literally amazed with the amount of bullets panning from each speaker in the rears. It sounded as if there were bullets ricocheting off of the walls in the room. Bass was punchy as it shows with the amount of gunfire and explosions. Dialogue is also well placed in the center channel sounding crisp and clear. The best part of this all around aggressive soundtrack is that it is well balanced between the dialogue and sound effects.
Audio Quality: 9/10

I highly recommend ‘The Marine 2’ over the original ‘Marine’ with a good cast and a surprising performance by Ted Dibiase. On Blu-ray this film offers excellent video and audio presentations. There is a boatload of special features available with all of them in HD except for 2 features in standard definition.
Overall Rating: 9/10