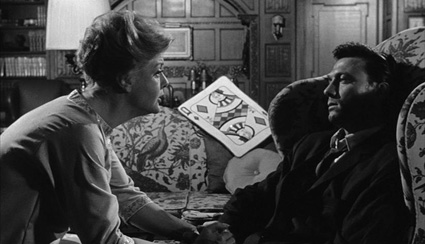 You will never find a more chillingly suspenseful, perversely funny, or viciously satirical political thriller than The Manchurian Candidate, based on the novel by Richard Condon (author of Winter Kills). The film, withheld from distribution by star Frank Sinatra for almost a quarter century after President Kennedy’s assassination, has lost none of its potency over time. Former infantryman Bennet Marco (Sinatra) is haunted by nightmares about his platoon having been captured and brainwashed in Korea. The indecipherable dreams seem to center on Sergeant Raymond Shaw (Laurence Harvey), a decorated war hero but a cold fish of a man whose own mother (Angela Lansbury, in one of the all-time great dragon-lady roles) describes him as looking like his head is “always about to come to a point.” Mrs. Bates has nothing on Lansbury’s character, the manipulative queen behind her second husband, Senator John Iselin (James Gregory), a notoriously McCarthyesque demagogue. 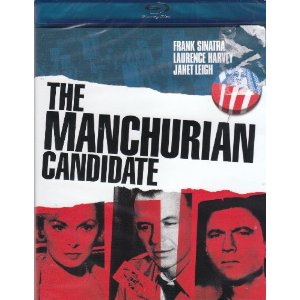 This is one of the great Cold War thrillers. It features Laurence Harvey as Raymond Shaw, Frank Sinatra as Major Bennett Marco, Angela Lansbury as Shaw’s mother, Mrs. Iselin, and Janet Leigh as Rose.

Although the story is familiar to most people, I’ll recap it briefly. Shaw, Marco, and several fellow soldiers are captured during the Korean War. They are transported to China where they undergo intense brainwashing. When they come back, they are all convinced that Shaw (who is well connected politically – his stepfather is a U.S. senator) singlehandedly wiped out countless numbers of the enemy and saved them all. He is awarded the Congressional Medal of Honor based upon their testimony.

After his return to the States, his handlers intend to use him as a political assassin. Prior to that, Marco and some of the others start having nightmares making them think that everything is not as it seems. Maj. Marco is intent on finding out the truth.

I will refrain from telling anymore to avoid spoilers. Suffice it to say, there are lots of psychological machinations and some intense action. This film is very well done. It was made in 1962 so the viewer should not expect lots of special effects, etc. In spite of that, I think that this version is far superior to the more recent one. For those who want to see the movie and don’t know which one to get, this is the one.

The print is presented in 1080p/AVC MPEG-4 with a 1:75:1 aspect ratio. This is one beautiful looking transfer from MGM and black & white films really shine in high definition when mastered properly. Blacks are inky and look as dark as an oil change after 5,000 miles on a vehicle. I found the image to be very sharp and clear with some very good details. Grain is present with this print, but it is a bit more than I would have expected. This might leave grain haters and fan of the film rather disappointed. There are a few issues with the print where there is some artifacts present throughout.
Print Quality: 9/10

The audio is presented in a DTS-HD MA l0ssless 5.1 mix. ‘The Manchurian Candidate’ receives an upgrade to DTS-HD MA 5.1, but this is not a film that ever needed the bump to full 5.1. This is mainly a front heavy experience with small hints of the surrounds getting use. Dialogue is clean through the center without an issues.
Print Quality: 9/10

Besides great acting, I think the way it was shot is way ahead of its time. The brainwashing sequence is fascinating. Forget the remake and see one of the best films ever.
Overall Rating: 8/10