The Man In The Iron Mask Blu-ray Review 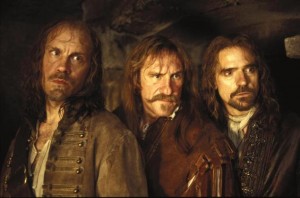 Footnotes in movie books are likely to reduce this swashbuckling adventure down to a simple description: it was the first movie to star Leonardo DiCaprio after the phenomenal success of Titanic. As such it automatically attracted a box-office stampede of Leo’s young female fans, but critical reaction was deservedly mixed. Having earned his directorial debut after writing the Oscar-winning script for Mel Gibson’s Braveheart, Randall Wallace wrote and directed this ambitious version of the often-filmed classic novel by Alexandre Dumas. DiCaprio plays dual roles as the despotic King Louis XIV, who rules France with an iron fist, and the king’s twin brother, Philippe, who languishes in prison under an iron mask, his identity concealed to prevent an overthrow of Louis’ throne. But Louis’ abuse of power ultimately enrages Athos (John Malkovich), one of the original Four Musketeers, who recruits his former partners (Gabriel Byrne, Gérard Depardieu, and Jeremy Irons) in a plot to liberate Philippe and install him as the king’s identical replacement. Once this plot is set in motion and the Musketeers are each given moments in the spotlight, the film kicks into gear and offers plenty of entertainment in the grand style of vintage swashbucklers. But it’s also sidetracked by excessive length and disposable subplots, and for all his post-Titanic star power, the boyish DiCaprio just isn’t yet “man” enough to be fully convincing in his title role. Still, this is an entertaining movie, no less enjoyable for falling short of the greatness to which it aspired. 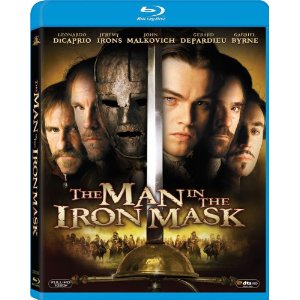 “The Man in the Iron Mask” is a classic with the lead played by Leonardo DeCaprio as both King Louis IV and his twin brother Philippe. It will appeal to DeCaprio’s fans, but I don’t think he nor the rest were cast right. His acting (and the others) is high calibre, but something rang off key. The movie ran slow the first half, I expected better. The dialogue and pace were not up to snuff. The second hour ran much more seamlessly. The story ran with several sub-plots, including the has-been “Three Musketeers.” One of the Musketeers, (John Malkovitch), who played a loving father, brings an enormous rage and hatred toward the self-centered King Louis.

It explodes when his son is sent to the front lines to die so King Louis could have his future daughter-in-law. However, though he was a Musketeer, I missed the feeling of the Musketeer legend, “All for one and one for all!”. The cinematography was excellent and costumes extravagant, especially during the “masked ball” – which also played against the title of the movie. I missed the English accent – although I know it was to have been set in France. Jeremy Irons, Gabriel Byrne(as the King’s loyal subject), and Gerard DePardieu (the only true Frenchman who had to speak English without an accent!) all did their best in this eclectic casting event.

The second half of “The Man in the Iron Mask” is the best. with the tension of putting Philippe, with a quick makeover, in the middle of Louis’ court during a masquerade ball. This gave me involvement that was missed the entire first half of the movie. Unfortunately, it’s a case of too little, too late. The ending of “The Man in the Iron Mask” is a foregone conclusion. To make the most of the short plot, which is drawn out in most of the first half, the second half we see the Musketeers get caught, escape, backed against the walls, fight, learn some deep, dark secrets, and the brothers then face off. D’Artagnan must choose between a new king and his friends, or stick by the spoiled runt of a monarch.
Movie Content: 9/10

The print is presented in 1080p/MPEG-4 with a 2.35:1 aspect ratio. I found the transfer to be better than the DVD version, but there are areas where the print could have received more effort. Colors are vibrant throughout the entire series. Blacks are deep which result in some very good details. There is a problem at times where some scenes look like they are out of focus. I noticed this anytime the camera panned back. There is also a hint of grain/noise throughout the film but is never intrusive.
Video Quality: 7/10

The audio is presented in DTS-HD MA lossless 5.1 mix. The films special effects really takes advantage of the soundfield with any action sequences. The DTS track  The rears get a fairly good work out with a lot of shifting from speaker to speaker making this a dynamic sounding experience. I couldn’t believe how dynamic the sound effects and the soundtrack were across all surrounds. Dialogue is well balanced and very clean.
Audio Quality: 7/10

“Man in the Iron Mask” is a very good film that I originally watched on DVD several years ago based on a recommendation from a friend. What makes this film so great is also an all-star cast that works so well together with a great story. All the special features from the DVD are ported over to the Blu-ray. This is highly recommended purchase if you are a fan, but you might be turned off by the disappointing video quality although it is better than the last DVD release.
Overall Rating: 7/10