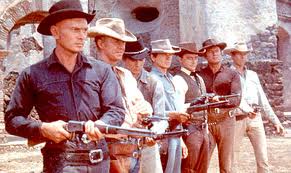 Akira Kurosawa’s rousing Seven Samurai was a natural for an American remake–after all, the codes and conventions of ancient Japan and the Wild West (at least the mythical movie West) are not so very far apart. Thus The Magnificent Seven effortlessly turns samurai into cowboys (the same trick worked more than once: Kurosawa’s Yojimbo became Sergio Leone’s A Fistful of Dollars). The beleaguered denizens of a Mexican village, weary of attacks by banditos, hire seven gunslingers to repel the invaders once and for all. The gunmen are cool and capable, with most of the actors playing them just on the cusp of ’60s stardom: Steve McQueen, James Coburn, Charles Bronson, Robert Vaughn. The man who brings these warriors together is Yul Brynner, the baddest bald man in the West. There’s nothing especially stylish about the approach of veteran director John Sturges (The Great Escape), but the storytelling is clear and strong, and the charisma of the young guns fairly flies off the screen. If that isn’t enough to awaken the 12-year-old kid inside anyone, the unforgettable Elmer Bernstein music will do it: bum-bum-ba-bum, bum-ba-bum-ba-bum…. Followed by three inferior sequels, Return of the Seven, Guns of the Magnificent Seven, and The Magnificent Seven Ride! 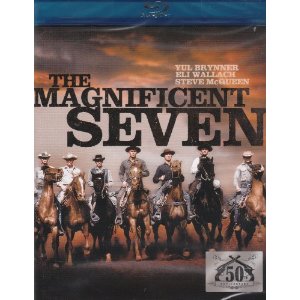 A gang of Mexican bandits, about 30 of them, invade a village and demand their tribute. When met with resistance, a bullet in the belly is the villager’s reward. What to do? They’re just farmers, not hired guns. The elder of the village says go and buy guns!

[It’s interesting, in the “making of” of this film, they had a censor who had to ensure that the Mexican people were not be degraded in this film as they were in an earlier film, Vera Cruz. In the original Japanese film, The Seven Samurai, the Seven were hired. This looked like a degradation, so the censor accepted that the villagers would buy guns, not men. That they did hire men was an afterthought rather than a main plot point of the earlier adaptation.]

After safely getting the funeral wagon to the plot (after much shooting, joking around and a little whiskey to keep ya warm), Brynner (Chris) is confronted by the villagers as to where to get guns, etc. They convey that they’re being taken advantage of and want to get rid of this bandito.

Throughout the film the question is asked why Chris does this. Is it an honor thing? Certainly not money (20 dollars, even by 1895 standards is cheap). And could be he just likes the thrill of being a hired gun. It’s a matter of honor and integrity that the audience is left to ponder.

What makes the film great are several themes: The camaraderie of seven men, who separate are pretty good but as a solid team are a force to be reckoned with. This theme has been repeated time and time again, but The Magnificent Seven was the first film to do this successfully. It’s been copied since.

Another theme is the music! Bernstein’s theme is one of the most recognized and even earned an Oscar for that year. As an aside, the film was not that hot right out of the gate. It was only after its hit in Europe and then its subsequent replay to American audiences that it finally caught on.
Movie Quality: 9/10

The print is presented in 1080p/AVC MPEG-4 with a 2:35:1 aspect ratio. Fans of the film will be happy that MGM did a good job with the quality of the print. The strongest part of the print has to do with the clarity and details. Clarity is quite impressive with details being a huge improvement over the DVD release. Just looking at the textures on cloth such as the the poncho one man was wearing you could see the fine details in the cloth. Black levels are excellent. There is very minimal dirt and white specs that are present. Grain is also present throughout which stays fairly consistent.
Print Quality: 9/10

The audio is presented in a DTS-HD Master Audio 5.1 mix. This mix is good for being upgraded to DTS-HD MA 5.1 filling the soundfield with the score and guns blazing. The film is still front heavy due to the audio design, but when the rears do get action they their not faint. Also the iconic Elmer Bernstein theme has also never sounded better. Dialogue comes through the center channel very clear and crisp. I found the dialogue to be much clearer with this new mix.
Print Quality: 9/10

John Ford defined the Western genre. Akira Kurasawa borrowed from it but created an entirely new genre with “The Seven Samurai”. Director John Sturges borrows liberally from both but pays homage and creates something wholly new and original. By extension you can say that this film also paved the way for the work of Sergio Leone and Sam Peckinpah in keeping the Western alive and vital.
Overall Rating: 8/10