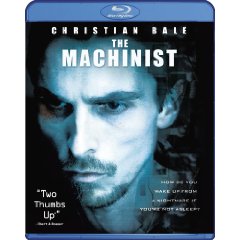 As a bleak and chilling mood piece, The Machinist gets under your skin and stays there. Christian Bale threw himself into the title role with such devotion that he shed an alarming 63 pounds to play Trevor Reznik (talk about “starving artist”!), a factory worker who hasn’t slept in a year. He’s haunted by some mysterious occurrence that turned him into a paranoid husk, sleepwalking a fine line between harsh reality and nightmare fantasy–a state of mind that leaves him looking disturbingly gaunt and skeletal in appearance. (It’s no exaggeration to say that Bale resembles a Holocaust survivor from vintage Nazi-camp liberation newsreels.) In a cinematic territory far removed from his 1998 romantic comedy Next Stop Wonderland, director Brad Anderson orchestrates a grimy, nocturnal world of washed-out blues and grays, as Trevor struggles to assemble the clues of his psychological conundrum. With a friendly hooker (Jennifer Jason Leigh) and airport waitress (Aitana Sánchez-Gijón) as his only stable links to sanity, Trevor reaches critical mass and seems ready to implode just as The Machinist reveals its secrets. For those who don’t mind a trip to hell with a theremin-laced soundtrack, The Machinist seems primed for long-term status as a cult thriller on the edge.

Even if you’ve heard about Christian Bale’s 63-pound weight loss for “The Machinist,” the first time he appears on-screen without his shirt comes as a huge shock. With one-third of his weight gone, his collarbone rises out of his shoulders like a crossbeam. When he turns to the side, his ribs jut out above his concave stomach to form a deep bowl. A back view shows his vertebrae snaking up his back like the external spinal column of an alien life-form.

Bale’s Trevor Reznik is not just a physical stunt, however. His performance is as extreme as the weight loss, a convincing portrait of a man who has gone so far over the edge he’s no longer quite human. Eating is not the only thing Trevor no longer does. He also cannot sleep and hasn’t for a year. He moves through the world like an alien, a freak viewed with deep suspicion by the other guys at the machine shop where he works. His only real contact comes from a prostitute (Jennifer Jason Leigh, once again stuck doing the downtrodden heart-of-gold thing) and the waitress at the 24-hour airport coffee shop where he endures his nights.

The ending of ‘The Machinist’ stopped it from receiving a perfect score, but see this movie for the other hour and a half. It is a grim story, but at the same time darkly comic. It just through things off for me albeit this being a very well done psychological thriller.
Movie Content: 9.5/10

The print is presented in 1080p/AVC MPEG-4 with a 2.35:1 aspect ratio. With ‘The Machinist’ being a dark film, the details are astonishing and really bring this film even more to life. The image was very pristine too due to all the dark colors throughout the film. Black and gray colors are prevalent in this print and stand out very well providing excellent depth. There is a dark tint over the entire image which gives the film that atmospheric feel. While the image is excellent looking, there are instances of white specs that appear throughout the print like other Paramount Blu-ray catalog titles. Details are excellent as you can see every rib and bone of Christian Bale’s when they show his body.
Print Quality: 8.5/10

The audio is presented in Dolby TrueHD 5.1 mix. This is a more of a front heavy presentation. When the rears are in action, we get some nice effects and the score adds to the atmosphere in the soundfield. It is a bit disappointing that the soundfield did not get better usage from a film like this. There are times with the score where it would have added even more to the experience. Dialogue is clean through the center sounding ever so crisp.
Audio Quality: 7.5/10

All special features are presented in standard and high definition. The exciting news for fans is that all features have been ported over from the previous DVD release.
Special Features: 8/10

I found ‘The Machinist’ to be an excellent film albeit the shoddy ending which for some is excellent and others like myself hurt the film a bit. I saw the ending coming earlier in the film, so it wasn’t a total shock for me at the end. On Blu-ray the film encompasses a nice video and underwhelming audio presentation. Fans of this film should not hesitate to upgrade to the Blu-ray. This film is highly recommended.
Overall Rating: 9/10