“The Lucky Ones” DVD Review

Posted in DVD Reviews by George Theofanopoulos on 27 January 2009 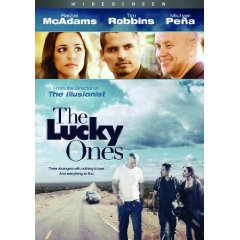 Cheever (Tim Robbins) is looking to return home from his last tour of duty. He has a wife and son in St. Louis that have been waiting his return. He is not alone in trying to get home to his family. There is Colee (Rachel McAdams) who is on a mission to return a special guitar to the family of her friend one and then T.K. (Michael Pena) trying to make his way to Las Vegas. They run into a few issues at the New York City airport halting them from reaching their destinations.

It leaves the three to get a rental car to drive to the western side of the United States. They share stories during the car ride that ends up making the trio even closer. If it isn’t one problem it is another as they try to make their way home. Their biggest fear is that they may not make it back home in time with the possibility of being redeployed.

With soldiers returning home from Iraq, you would think that Director Neil Burger would have taken a different approach with this film. I found it rather hard that these soldiers would continue to run into obstacle after obstacle after having to be overseas defending our country. You would think that after the entire mental emotional ride that these guys have suffered through we are taken down into some very familiar territory.

‘Lucky Ones’ is light, social, conversational, and, as a result, wholly inappropriate. It mistakenly believes it is laudable simply because it constructs a story around our country’s servicemen and women. But when Burger and co-writer Dirk Wittenborn are tasked with inventing credible conflicts for their troops, Lucky Ones topples like a two-legged table. The script is where I was more than disappointed with here as it just felt that they were throwing difficulty into this. It was as if creating this extra conflict for war torn heroes was fun by the team.

The one saving grace of this film is that Tim Robbins, Rachel McAdams, and Michael Pena are good performers onscreen. It helps to have someone like Tim Robbins as a leading star, but Rachel McAdams shines through the strongest here. While she comes off as a very naïve character, she is tough holding her own. Both Pena and Robbins are also great in their roles, but do not shine like McAdams here. This is not a bad thing at all as it goes to show how much McAdams has grown in her acting career.
Movie Content: 3/5 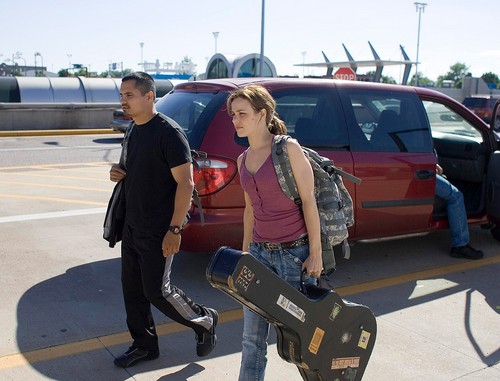 The film only comes with one special features in the making of featurette “A Look Inside: The Lucky Ones”.

This film is in no way what I expected as it veers off into somewhat familiar territory. The cast is what holds this film together, even with a script that is not that strong. I would recommend this film as a mere rental if you have a open Saturday afternoon.
Overall Rating: 3/5 (Rental)