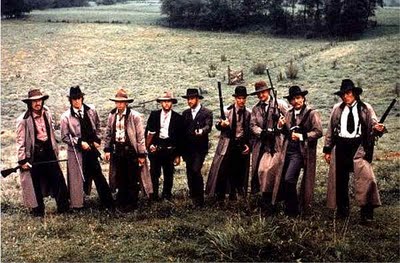 This terrific Walter Hill Western follows the careers of the James and Younger brothers–and uses the nifty idea of casting actual clans of acting siblings in the roles. Thus, the James brothers are played by James and Stacy Keach; the Youngers by David, Keith, and Robert Carradine; the Millers by Randy and Dennis Quaid; and the Fords by Christopher and Nicholas Guest. Hill, working with an evocative Ry Cooder score, creates a film that is at once breathtakingly exciting and elegiac in its treatment of these post-Civil War outlaws. The Keaches in particular bring a surprising dignity to the roles of Frank and Jesse James, while David Carradine is a hoot as Cole Younger–and the Quaids mimic real life (as it was for them then) in their battles as the Miller brothers. Bloody, to be sure, but also bloody good. 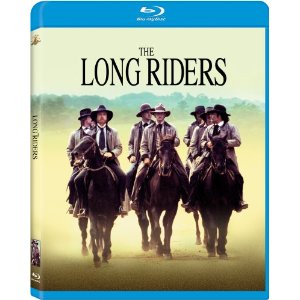 I came across the Long Riders while exploring Walter Hill’s more cult oriented films like Hard Times, Streets of Fire and the Warriors. I’ve also been exploring the western as a genre and was curious to see a more modern filmmaker take a crack at one. I was intrigued by the gimmick of casting so many groups of real life brothers (the two Keach’s as the James Brothers, the two Quaids as the Millers, the three Carradine’s as the Younger gang, and the unlikely Guest Brothers as the Fords), and was a little afraid that it would distract my attention from the film. In fact this stunt casting worked perfectly for me as there was an immediate shorthand between the siblings that made the characters rich without having to spend much time fleshing them out. There’s also a surprising lack of ego, with all actors getting pretty equal screentime.

Walter Hill borrows some of the visual panache in the Long Riders from the unglorified anti-violence of Sam Peckinpah, but the film is much more rooted in the 80s style of filmmaking. In fact, I’d say that this flick is the cinematic forefather of films like Young Guns and Tombstone, placing an importance on revisionist history, style and a flair for an extremely entertaining narrative over sticking to genre conventions or the strict facts. That isn’t to say that’s a bad thing, quite the contrary. As for its impact on Young Guns, it’s surprising how many of little flourishes it borrows from the Long Riders. In the final bank robbery gone bad, Hill utilizes a really striking effect in the sound effects of the bullets zipping across the screen. Whenever a shot is going to connect, there’s a special zooming build up to the moment when the bullet strikes that’s really stylistic and memorable. Young Guns takes this wholesale in its final sequence as well.

Al in all the film plays a little slow, but my only real complaint is that the score can be very distracting at times, drowning out the dialogue and wrecking the intended tone of some of the scenes. There’s also a extraneous bit of plot that finds Cole Younger traveling down to Texas to find his on again, off again prostitute lover that ends up in a very goofy knife match between David Carradine and James Remar, complete with a sash gripped between their teeth to keep them within striking distance. It’s very heavy handed and doesn’t do much for fleshing out Carradine’s already intriguing portrayal of Cole Younger. I think anyone who is a fan of Spaghetti Westerns, the more stylistic entries into the genre of the late 80s, early 90s, or Any of Hills more cultish work will really enjoy this flick.
Movie Quality: 6/10

The print is presented in 1080p/AVC MPEG-4 with a 1:85:1 aspect ratio. This is one of the latest wave of MGM releases have had a subpar video quality. ‘The Long Riders’ is a pleasant surprise compared to the rest of titles I have reviewed from this latest wave. While colors are strong and accurate looking they do appear rather soft throughout. Blacks are deep. There is a fine layer of grain throughout. The print is not pristine as there are times where there is white speckles and a bit of dirt. Details and clarity is decent and really helps with this 1080p transfer for larger screen viewings. If you already own this on DVD, and are a fan of the film upgrading to the Blu-ray version would be recommended.
Print Quality: 7/10

The audio is presented in a DTS-HD Master Audio lossless 5.1 mix. This is a real disappointment that this film was not given the 5.1 DTS-HD MA 5.1 upgrade as it really could have helped with the atmosphere. The 2.0 mix is basically a front heavy experience which sounds good in the lossless format, but not like what it would have with a full 5.1 mix. This gives the film a really flat sound when it comes to sound effects making it sound like a western right from the 50’s. The excellent score really comes pouring through bringing new life to the score. Dialogue is clear with no apparent issues.
Print Quality: 7/10

‘The Long Riders’ was full of potential to be a great movie. It was the first film about the James Gang to strip them of their Robin Hood myth, and that alone was enough to make it promising. Then, it used actual sets of acting brothers to portray the James, Younger, Miller, and Ford brother – a truly intriguing touch. Its action scene were brilliantly done, and it paid scrupulous attention to all the little details of dress, equipment, and furnishings to create an authentic 19th century atmosphere.
Overall Rating: 6/10