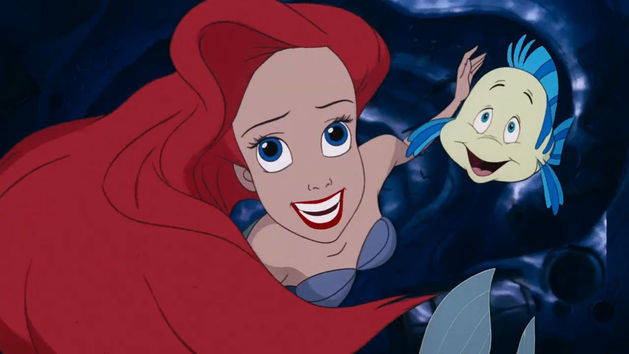 From the moment that Prince Eric’s ship emerged from the fog in the opening credits it was apparent that Disney had somehow, suddenly recaptured that “magic” that had been dormant for thirty years. In the tale of a headstrong young mermaid who yearns to “spend a day, warm on the sand,” Ariel trades her voice to Ursula, the Sea Witch (classically voiced by Pat Carroll), for a pair of legs. Ariel can only succeed if she receives true love’s kiss in a few day’s time and she needs all the help she can from a singing crab named Sebastian, a loudmouth seagull, and a flounder. The lyrics and music by Howard Ashman and Alan Menken are top form: witty and relevant, and they advance the story (go on, hum a few bars of “Under the Sea”). Mermaid put animation back on the studio’s “to do” list and was responsible for ushering Beauty and the Beast to theaters. A modern Disney classic. 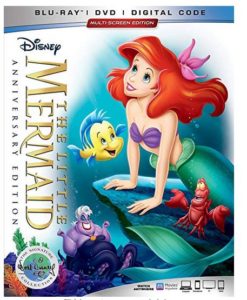 The movie drew in $84 million during its initial opening and earned $211 million in total lifetime gross. This movie is considered the first of a period known as the Disney Renaissance, which would soon usher in other blockbusters like The Lion King, Aladdin, and Hercules.

Jodi Benson was cast in the lead voice of Ariel during the film’s earliest stages of production. Although Benson was primarily a stage actress up to this point, Disney selected her because director Rom Clements felt it was critical that Ariel’s speaking and singing voice be recorded by the same person, which was not customary of Disney productions. Christopher Barnes was cast as the charming Prince Eric, and Pat Carroll voiced the notorious sea witch Ursula.

The inspiration for this film rests in an old copy of Christian Anderson’s fables that Rom Clements stumbled upon shortly after The Great Mouse Detective’s release. He immediately wrote up a two-page proposal for Disney CEO Mike Eisner, who accepted the idea warmly. John Musker, Clement’s co-director on The Great Mouse Detective, wrote a twenty-page outline that was quickly approved for a storyboard.

Glen Keanne and Mark Henn were assigned to oversee the animation of Ariel. According to Keanne, Ariel’s body is based on Alyssa Milano from Who’s the Boss? while her underwater characteristics derive from American astronaut Sally Ride’s movements in space. Keane was also originally assigned to design the creation of the villain Ursula, who was based off a drag performer named Divine. The character was drawn to align with the voice of Bea Arthur from the Golden Girls, but Arthur turned down the part. Other minor characters like Sebastian and King Triton were each allotted their own artist for creation and animation.

While animation and storyboard were in the primary stages of development, a group of highly skilled musicians were brought together. Acclaimed off-Broadway writer Howard Ashman teamed up with composer Alan Menken to create a Broadway-styled musical score that would highlight the plot through memorable musical numbers. Ashman is largely possible for the reggae undertones that are present throughout the film, as it was his idea to change the servant Sebastian to Jamaican descent as opposed to English.

More money was spent on producing The Little Mermaid than any other previous Disney film, due largely in part to the opening of a satellite feature animation facility in Lake Buena Vista, Florida. The studio’s first projects include a Roger Rabbit cartoon short, in addition to hosting the major production behind The Little Mermaid.

In order to capture the essence of being underwater, Disney would have to utilize a vast amount of special effects that hadn’t been used since Fantasia in 1940. Mark Dindal, head of special effects, estimated that over one million bubbles were drawn. Other techniques like airbrushing, backlighting, superimposition, and minimal computer animation were also used to create a convincing underwater wonderland.

Although minimal computer animation was used, The Little Mermaid was the last Disney feature animation to use hand-painted cells, which had previously been used for all films. Immediately following the movie’s release, Disney would begin using a Pixar-created software, Computer Animation Painting System (CAPS,) for digital coloring and scanning multiple images together.

Another unique tactic used for the creation of this film was using live action models to animate character motion. This practice was common in the 1940s and 1950s under the supervision of Walt Disney for films like Cinderella and Sleeping Beauty. Sherri Lynn Stoner of the Los Angele’s Groundlings improvisation comedy group was chosen to exaggerate Ariel’s motions during key scenes, which animators could replay at a later time to capture lifelike motion.

The Little Mermaid is a critical component of Disney animation history for several reasons. First, The Little Mermaid was the first animated fairy tale since Sleeping Beauty in 1959, proving that contemporary audiences were receptive to that story-telling medium. Second, this film assured Disney that feature animations were a profitable venue again. For years before The Little Mermaid’s release, Disney’s profit relied heavily on theme park and merchandise revenue.
Movie Quality: 9.5/10

The print is presented in 1080p/AVC MPEG-4 with a 1.78:1 aspect ratio. ‘The Little Mermaid’ is a perfect restoration to Blu-ray that really shines new light to this classic that is less than 20 years old. ‘The Little Mermaid’ is one of the most colorful palette’s in recent animated history and it really shows here in high definition. The images sparkle with a crystal clear image almost too perfect. The rich color, deep dark blacks and detail in the images are truly astonishing. There are no issues with the print at all and a lot has been cleaned up. This is how good animated features should look on Blu-ray.
Print Quality: 10/10

The audio is presented in a DTS-HD MA l0ssless 7.1 mix. The sound is rather impressive in ‘The Little Mermaid’ and this I wasn’t even expecting going in. It takes advantage of the soundfield with the rears getting excellent sound effects and the soundtrack peers into the soundfield. Dialogue is well placed through the center channel with voices being so ever clear. I felt like I was immersed the entire time throughout the film.
Print Quality: 10/10

While nearly all Disney fans are familiar with this princess classic, few people realize how groundbreaking and revolutionary The Little Mermaid was in reestablishing The Walt Disney Company’s presence in cartoon animation. By initiating an era of success known as the Disney Renaissance, this film will go down in history both in animation and in the hearts of avid Disney-lovers.
Overall Rating: 9.5/10