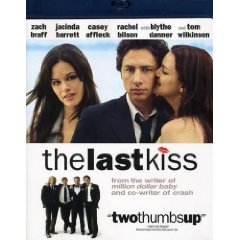 A remake of the Italian film L’Ultimo Bacio, The Last Kiss was largely ignored in theaters despite its Gen-X themes and appeal of star Zach Braff (Scrubs), who last made a splash in theaters with his similar twentysomething angst film Garden State. A drama about midlife crises (mostly for people approaching 30, that is), director Tony Goldwyn (A Walk on the Moon) has assembled a top-notch cast, but there’s not enough likeability in the characters to care. Architect Michael (Zach Braff) is a commitmentphobe who wanders into a flirtation with coed Kim (Rachel Bilson) because he’s gun-shy about settling down with his perfect girlfriend Jenna (Jacinda Barrett), who’s expecting his child. His fellow pals face their own romantic crossroads; one (Michael Weston) desires to settle down with a woman who doesn’t love him back; another (Eric Christian Olsen) can’t find someone who just wants a meaningless fling like him; and the third (Casey Affleck), ponders leaving his weary wife who’s constantly berating his shortcomings as a father. Most depressing is Jenna’s mother (Blythe Danner), who’s tired of feeling neglected by her stoic husband (Tom Wilkinson). Danner and Wilkinson are compelling as longtime marrieds who’ve lost their spark, but Braff’s character is wholly unlikeable, even aside from his indiscretions. The bright spot is Bilson, in her first movie role, utterly adorable as the sexy college student who’s got more parts vulnerability and sass than any stuck in the Other Woman role. There’s some fine acting in The Last Kiss, but not enough character development to care about anything they’re going through.

‘The Last Kiss’ isn’t about those butterflies a guy feels when he first looks upon the cutest girl he has ever seen; it isn’t about those wonderful times after sex where one’s feet can gently grace her lover’s lower leg while they whisper about life’s mysteries. It is about relationships on every level – past the points where they are simple and lack deep emotion. For the most part, the characters in ‘The Last Kiss’ are exactly what they would be had any of these events happened to them in real life.

For Example, after Jenna (Jacinda Barrett) kicks Michael (Braff) out of the house for kissing Kim (Bilson), it is no surprise that he does what he does. Which guy wouldn’t? Regret is almost always an afterthought in these situations and never a forethought. And the manner in which Blythe Danner’s character comes of age is incredible; the depths to which Tom Wilkinson’s character is subtly explored is equally fascinating. And these characters, including all of Michael’s friends, all mean everything to each other’s lives.

I would go so far as to say that this is a coming of age story, where the coming of age is never fully realized while it is also never fully introduced. There is a lot to learn from it, from all the stages it presents, and there are a world of words to say about love after watching ‘The Last Kiss’, arguably many more than those which could be said after Garden State. I would love to have a discussion with a fan of films who hates this movie – because we would both have a lot to say.
Movie Content: 8/10

The print is presented in 1080p/AVC MPEG-4 with a 2.35:1 aspect ratio. Colors look good providing a solid color palette. Black levels are also fine, yet do not stand out. Flesh tones are accurate and natural. I did notice some print issues throughout the film, but they weren’t anything that became overly distracting. There is some subtle grain throughout helping fit in with the film’s overall feel and tone. I just felt that this print was on the weaker side of Paramount catalog releases over the last few months.
Print Quality: 7/10

The audio is presented in Dolby TrueHD 5.1 mix. This is not a mix that will blow you away, but the rears do provide several moments of excellent sounding effects from the score. The score is very good and fits the film well. The dialogue is clean and clear through the center channel. This is a well balanced mix.
Audio Quality: 8/10 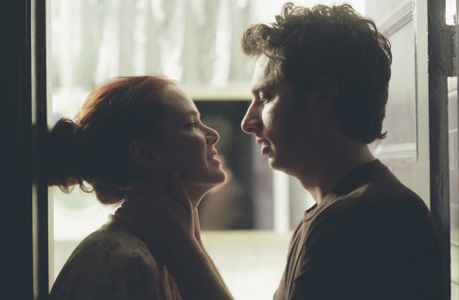 ‘The Last Kiss’ is not a bad film and really knows it’s target audience. The print on Blu-ray is underwhelming which took me by surprise considering that Paramount catalog titles have been great lately. There is an abundance of special features that will make fans of the film happy. I highly recommend ‘Last Kiss’ as a rental and a purchase for those that have enjoyed this film.
Overall Rating: 8/10