As the evil Ugandan dictator Idi Amin, Forest Whitaker gives an unforgettable performance in The Last King of Scotland. Powerfully illustrating the terrible truth that absolute power corrupts absolutely, this fictionalized chronicle of Amin’s rise and fall is based on the acclaimed novel by Giles Foden, in which Amin’s despotic reign of terror is viewed through the eyes of Nicholas Garrigan (James McAvoy), a Scottish doctor who arrives in Uganda in the early 1970s to serve as Amin’s personal physician. His outsider’s perspective causes him to be initially impressed by Amin’s calculated rise to power, but as the story progresses–and as Whitaker’s award-worthy performance grows increasingly monstrous–The Last King of Scotland turns into a pointed examination of how independent Uganda (a British colony until 1962) became a breeding ground for Amin’s genocidal tyranny. 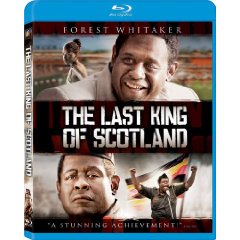 Forest Whitaker was simply remarkable as ex-Ugandan thug and dictator Idi Amin. The screenplay was adapted from a novel centered on a fictional character, Nicholas Garrigan, a Scotsman who becomes Amin’s personal physician. Two of the great aspects of this movie: Forest Whitaker and the local flavor. Whitaker justly received an Oscar for his performance. Not only does he bear an eerie resemblance to the real Amin, but he manages to create a more nuanced and deeper portrait than one might expect. Amin begins the movie as the new leader of Uganda following a coup. At first, Whitaker shows a gregarious and personable side of Amin with small flashes of his temper. As the story evolves, Whitaker deftly shifts his portrayal to the more paranoid, self-centered and ruthless tyrant.

Another fantastic aspect of the movie was the choice to film this movie on location in Uganda. While I can’t say that I would have noticed if the film was shot in another African country, but I can say the local casting and scenery were superb.

While I thought James McAvoy delivered a strong performance as Garrigan, my biggest critique of the movie was the screenplay. I thought certain parts of the screenplay and various aspects of McAvoy’s character were poorly written. For instance, at the outset of the movie, McAvoy comes across as incredibly naive and ill-informed about the turmoil taking place in Uganda, or for that part most of post-colonial Africa at that time. Additionally, some of the elements of the plot were a bit trite and predictable. While clearly done for dramatic purposes, they were a little too expected, especially the final 15 minutes.
Movie Quality: 10/10

The print is presented in 1080p/AVC MPEG-4 with a 1.85:1 aspect ratio. his is a rather huge upgrade on Blu-ray over the DVD. I have owned the film on DVD since its release and have viewed it several times. The print actually looks stunning with a very nice looking color palette that pops. Black levels are deep throughout the film. There is grain thought out the film, and if you are a fan of film grain this is hanled very beautifully.
Video Quality: 10/10

The audio is presented in DTS-HD MA lossless 5.1 mix. This film receives a huge upgrade with the addition of a DTS-HD MA audio mix. The dialogue is clean and clear through the center channel with no apparent issues. The rears do get some usage during times when sound effects are present or the soundtrack is playing. I was rather happy with the way the film sounded even better than the DVD version albeit this being a dialogue driven film due to the depth of the voices and even more so with the crowd noises coming through the rears.
Audio Quality: 10/10

I am a huge fan of Forest Whitaker and between this film and his performance on ‘The Shield’ proved what a versatile actor that he has become. It does feel like ever since this film that Whitaker has taken more time off and what a nice way to take a hiatus. The video and audio have received  a huge upgrade over the DVD release receiving perfect scores for a catalog release. This is highly recommended and worth a purchase if you are a fan.
Overall Rating: 9/10