Posted in Blu-ray Reviews by George Theofanopoulos on 30 September 2011
A hot-button topic in the horror community from the minute it was announced, the 2009 remake of Wes Craven and Sean Cunningham’s controversial Last House on the Left will undoubtedly leave audiences polarized in regard to both its treatment of the source material and its level of violence. As with the original film, which drew inspiration from Ingmar Bergman’s The Virgin Spring (and was itself based on 13th century Scandinavian legend), director Dennis Illadis’ film traces the downward spiral of two teenage girls (Sara Paxton and Martha MacIsaac from Superbad) who fall prey to a quartet of degenerates. The perpetrators then seek refuge in a nearby vacation home–which happens to be occupied by Paxton’s parents. Both versions spare no quarter in detailing the torments inflicted on the two girls, as well as the ruthlessly efficient revenge metered out to the killers by the parents. 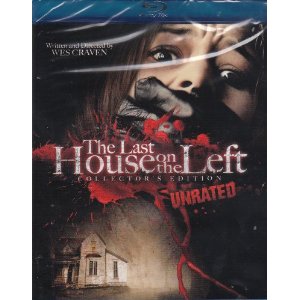 Wes Craven’s The Last House on the Left was released in 1972 and I heard from many people who were old enough to see it when it first came out that it was the most shocking thing anyone had ever seen. To this day the original is still a raw and often disgusting piece of cinema, so being that in 2009 films can push the envelope even more, I didn’t know how far this thing would go.

It’s shocking, brutal and gross, but it didn’t just go the buckets of blood route. Yes, there is some gore, but compared to films like Hostel and SAW this is quite tame. What does get under your skin is the rape scene. I read that some people witnessed others leave the theater at this point and they never came back. I guess they didn’t see the original or read up on what they paid to see before plopping in their seat. It shows little skin compared to the 1972 version, but it’s a long scene that is painful to watch.

The cast is quite good, though most are actors whose names you won’t know. The father, played by Tony Goldwyn, and the leader of the killers, played by Garrett Dillahunt were the standouts.

For a film as gritty as this one, the cinematography is polished and takes away a little bit of the raw power that the original had. I actually don’t think Wes Craven’s 1972 flick holds up well today and thought this remake was better.

Make sure you are in the right frame of mind before seeing this one. By that I mean, don’t watch The Last House on the Left and expect to be in a good mood when you leave. While it’s a pleasure to see the parents take out the villains one by one to avenge their daughter, you will leave the theater looking for the bright sun to make you feel clean again.
Movie Quality: 7/10

The print is presented in 1080p/AVC MPEG-4 with a 1:85:1 aspect ratio. Fans of the film will be happy that MGM did a good job with the quality of the print. At times I worry how catalog titles will turn out in high definition on Blu-ray, but those that like this film do not need to worry. Colors are well done with a rich color palette. My only issue with the print is the very slight print damage which isn’t noticeable. There is very minimal dirt and white specs that are present. Black levels are excellent. Grain is also present throughout which stays fairly consistent.
Print Quality: 9/10

The audio is presented in a DTS-HD Master Audio 2.0 mix. This is a film that is very front heavy based on the original mono track. Those that love the original mono sound design, you will not be upset to say the least here. The score is what encompasses the use of the rears to fill the soundfield. Dialogue comes through the center channel very clear and crisp.
Print Quality: 9/10

Like it or loath it The Last House on the Left is a horror classic which actually deserves its place in history as well as a worthy place in any respected horror fans collection.
Overall Rating: 7/10