Just when you thought it was safe to see another shaky, handheld, faux-documentary horror movie… along comes The Last Exorcism to raise the creep factor. Supposedly we are watching a documentary crew tagging along after one Cotton Marcus (Patrick Fabian), a hell-raising preacher who sidelines in exorcisms. He’s got a leather-bound volume full of dire drawings and incantations, and he knows the rubes just eat this kind of stuff up. Now Cotton has vowed to expose his own gimmicks for the camera, so he journeys to backwoods Louisiana to answer the call to save a putatively possessed girl–the better to debunk his own methods, once and for all, and get out of the exorcism business. Sounds like nothing could possibly go wrong. Then we meet the Sweetzer family: bible-thumping papa (Louis Herthum), not-quite-right son Caleb (eerie Caleb Jones), and possessed daughter Nell (Ashley Bell). Someone’s been mutilating the farm’s livestock, and dear little Nell has the vacant stare and sweet smile of a demon child. Director Daniel Stamm wisely allows the buildup to go on and on in non-hyped fashion, letting the sense of reality increase with each scene–the better to unleash the mayhem in the second half of the movie. It all goes over the top, and obviously the “found footage” gimmick has long since become a cliché that you either go along with or reject. But the climax is enough to warm the heart of any self-respecting fan of devil movies, and The Last Exorcism is distinguished by some very good performances, especially TV veteran Patrick Fabian, who creates a deft, funny, full-blooded character. 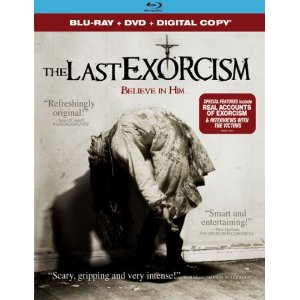 The Last Exorcism is an inspiring and unique example of quality horror cinema. It does things exceptionally well that so many others do not. First and foremost, one has to look at characters and characterization. The inherent benefit of mockumentary style is that it gives the viewer a more intimate look at a film’s subjects. However, the general problem with these films is that the characters are useless. Take Paranormal Activity for example: while the film is very well made and does a wonderful job in creating an overwhelming sense of dread by creating the feeling that something terrible is going to happen to the main characters at any moment, it takes far too much effort to empathize with or pity them, particularly Micah. Micah, like the three primaries in The Blair Witch Project, comes across more annoying than anything else, to the point where the audience isn’t sure whether they’d like to see him survive or be spoonfed to his grisly fate. Not so in The Last Exorcism. Patrick Fabian’s Cotton Marcus is an exceptional character, and a very realistic one at that. He comes across as altogether endearing and human, and that’s a rare thing in a genre so rafter-packed with cliches and stock.

The character of the pastor mid-crisis of faith is a delicate one, and those who created Marcus handled him with extreme care. While most are content to club the idea of a character losing touch with God over the audience’s heads (see Signs for a sterling example of this), The Last Exorcism presents it rationally and without bias. What’s brilliant about this turn, aside from it never really being explicitly stated, is that it doesn’t come on the heels of the typical devastating loss, ala Signs. Cotton Marcus does not curse God for the son he lost, or even for the hardship that he, his wife, and his son must bear with his son’s disability. No, he instead feels gratitude toward humanity in delivering him his son before he feels gratitude to God. It isn’t a falling out, and it isn’t a huge topic that is prodded at length over the course of the film. It is simply a man reaching a stage in his life where he questions some things.

Where the film also excels is the handling of religious topics, particularly the titular exorcism. Marcus acknowledges that exorcisms do not truly exorcise demons and concedes the tricks of the trade as the movie progresses, but he never devalues it as a service, defending it as a means to assuage people of a certain disposition into feeling at peace. In actuality, the film manages to touch upon a number of topics with careful subtlety when it would be easy to brandish them like the Mjöllnir, and never really chooses to take a stance for the audience, perhaps having enough trust in the viewer to draw their own conclusions. The exorcism and its use is played as something of a microcosm of religion in general, leaving the viewer to decide whether it should be taken at face value or as something of a placebo for those who need the feeling of divinity before they can help themselves. Handled gracefully, too, is the relationship between religion and psychiatric care, and deciding where, in a case such as the one portrayed in the film, one should end and the other should take hold.
Movie Content: 9/10

The print is presented in 1080p/AVC with a 1.85:1 aspect ratio. “The Last Exorcism” is a film that is more of a documentary style film like the “Blair Witch Project”. The presentation works well on Blu-ray with this documentary style presentation. Colors pop throughout the entire presentation. Blacks are strong and almost inky at times during the interior scenes. The darker outside scenes are a bit murky looking. The image has very good details which works well with how the film has been presented. Flesh tones were also natural. If you are a fan of this film and documentary style films like “Blair Witch” there is no disappointment here.
Video Quality: 9/10

The audio mix is presented in DTS HD 7.1 Master Audio lossless track. Where the film carries a lower quality image to suite the material, the sound is where this film truly excels. The sound here made me feel like I was a part of the film the entire time. The score was immersive that it giving this film a very creepy feel. Dialogue was clean, yet was the most disappointing aspect of the film since it was on the lower end of the spectrum.
Audio Quality: 9/10

The Last Exorcism is very much one of the finest films in the horror genre in the last decade, if not the last twenty years. It doesn’t go for shocks, the characters seldom (if ever) act irrationally outside of what they are, and there is little or no reliance on jump scares, all of which have, for some reason, become the bread and butter of making a modern day horror film.
Overall Rating: 8.5/10