The Invention of Lying Blu-ray Review

Ricky Gervais is a genius. He may not have cured cancer or discovered a new branch of mathematics, but having created The Office, Extras, and now The Invention of Lying has secured him a place in the history of comedy. The Invention of Lying imagines a world in which everyone unfailingly tells the truth; they don’t even know what fiction is. Every thought, however humiliating or harsh, tumbles out unvarnished. Then one day, a desperate unemployed writer named Mark (Gervais) concocts a lie–and in a world where everyone is unfailingly honest, a lie is believed with total and absolute gullibility. Mark can get anything he wants…but the one thing he truly wants is the love of a girl named Anna (Jennifer Garner, Alias, Juno), and she’s the one person he can’t bring himself to lie to.

The Invention of Lying balances a brilliant overall idea with inspired comic bits and deft cameo turns by a star-studded cast (among the many famous faces in bit roles are Philip Seymour Hoffman, Edward Norton, Jason Bateman, Christopher Guest, Tina Fey, Jeffrey Tambor, and more). The second half of the movie, which follows Mark’s romantic pursuit of Anna, isn’t quite as marvelous as the gradual unfolding of the situation and Mark’s grappling with his strange new ability, but that doesn’t keep the movie from being a unique and dazzling comedy. Simply not to be missed. Also featuring comedian Louis C.K., Rob Lowe, and Jonah Hill. 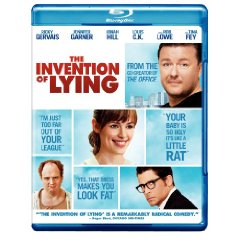 “The Invention of Lying” is the antithesis of last summer’s “Henry Poole Is Here,” which is to say that it’s an atheistic comedy instead of a faithful drama. Both are narrow-minded in that they fail to address a simple truth: The existence of God can be neither proven nor disproven. Still, the concept of “The Invention of Lying” is a very clever one, and I appreciated the fact that it goes for satire instead of saccharine. It’s often times quite funny, although never so goofy that the occasional serious statement doesn’t work its way through. It’s above all a great vehicle for Ricky Gervais, who not only stars but is also the co-writer and co-director. He plays Mark Bellison, a screenwriter living in an alternate reality in which no one has ever told a lie; one day, he discovers to his astonishment that he’s capable of saying something that isn’t true.

Can you imagine a world free from lies? Books and movies as we know them would cease to be, and that’s because fiction is untrue by definition. How, then, is Mark a screenwriter? Simple: In this world, movies are nothing more than a continuous shot of learned gentlemen sitting in a chair, reading out of history books. Such dullness is not limited to movies, though. Advertising is little more than confirming the existence of a given product, as seen during a Coca-Cola commercial (“It’s basically just brown sugar-water,” says a monotone man standing next to a plain-looking pedestal with a glass of Coke resting on it). No one uses flattery, and there’s no such thing as sparing anyone’s feelings; when Mark first meets his blind date, Anna McDoogles (Jennifer Garner), she greets him at the door by saying, “I’m equally depressed and pessimistic about our date tonight.” Later on, during the date, she takes a call from her mother: “He seems nice,” she tells her. “A bit fat. No, I won’t be sleeping with him tonight.”
Movie Quality: 8/10

The print is presented in 1080p/AVC MPEG-4 with a 1.85:1 aspect ratio. I found this print to be rather eye pleasing with vibrant colors. Fleshtones are very natural and accurate, considering that we see a few bare necessities throughout. Black levels are solid throughout. The image was also sharp with excellent details. The image is clean and pristine making this a very nice looking image.
Video Quality: 9/10

The audio is presented in DTS-HD MA lossless 5.1 mix. This film is a dialogue driven film. Dialogue was clean through the center channel with a nice degree of depth. I never had to raise or lower the volume to make out what was being said. The soundfield does get a few effects into play, but nothing major. The soundtrack takes advantage of the soundfield with audio also pouring through the rears.
Audio Quality: 9/10

There’s parts of the movie that lag a little, and some concepts I would’ve liked to have seen explored a little more, but overall, this is a good film and one I recommend as a rental first before making a purchase.
Overall Rating: 8/10