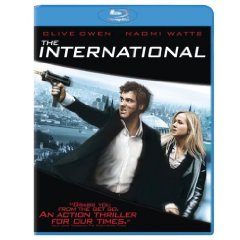 The International is actually two movies in one: A highbrow thriller about a sprawling bank that resorts to murder and arms sales to retain its power, and a sleek visual essay on how architecture and interior design shapes your perceptions. Interpol agent Louis Salinger (Clive Owen, still not quite a star despite Inside Man and Children of Men) has been on the brink of conclusive evidence against the villainous international bank, but his sources always end up dead. With the aid of a Manhattan district attorney (Naomi Watts in a woefully underwritten part), he stumbles on the trail of the bank’s favorite hit man, who might provide the (literally) smoking gun Louis needs. The International starts out smooth and silky, with visual style to burn and Owen’s intense fervor. The plot gradually bogs down in incoherent moralizing, but along the way there are some taut sequences, including a bloody shootout in the Guggenheim Museum where alliances shift unexpectedly. But what makes The International worth seeing is director Tom Tykwer’s astute eye for public space: Chic postmodern buildings, broad Italian plazas, Turkish rooftops like mountain paths–Tykwer orchestrates actors through these architectural shapes, his hypnotic visual sense creating far more tension and excitement than the plot. Also featuring Armin Mueller-Stahl (Eastern Promises) and Ulrich Thomsen (The Celebration) as malevolent Europeans.

If I could judge a movie based on one scene, ‘The International’ might have a chance. For two hours of unbearable dialogue and spotty storytelling The International has a single bright spot to make it worthy of recommendation. The thing is, it’s a powerfully, overwhelmingly bright spot that lasts for about 12 minutes and makes me wonder–despite the horrible things I’m about to say about the rest of the film–if I should tell you to go see it.

Considering a plot about an evil bank seems about the most appropriate possible story in this age of foreclosures and bail-outs, the expectations beyond that were quite low–and yet Director Tom Tykwer (Run, Lola, Run) still manages to turn it sour. He abandoned the kinetic frenzy of Run, Lola, Run for a slow plodding pace that only manages to pick up at the Guggenheim and the very end. Even if Tykwer doesn’t cheapen the film with a lousy happy ending, it feels just as sleazy considering all the shortcuts and unexplained coincidences that wrap it all up.

Overall, I enjoyed  ‘The International’, but for most of its 118 minutes, I was quite aware that what I was seeing was not going to leave much of an impression. It’s a solid but seldom exciting movie. It wants to think it has captured the flavor of our times, but it isn’t rooted enough in believability. If you like Clive Owen, I’d say it’s worth a look. If you’re not a particular fan…then there’s very little reason to spend time on it.
Movie Content: 7.5/10

The print is presented in 1080p/AVC MPEG-4 with a 2.35:1 aspect ratio. The print looks very good throughout without any apparent issues. Colors are vibrant and carry pop which brings out the fine details. The detailed scenes stand out very well. Blacks are deep. I found the print to be crystal clear with no artifacts or print damage. The darker look and feel of the film looks great with the appropriate lighting making this timepiece film standout.
Video Quality: 9/10

The audio is presented in Dolby TrueHD 5.1 mix. This is a very immersive soundtrack during the action sequences. This is a film where there are a lot of action and chase sequences. Those looking for an audio mix that will take advantage of your equipment, this is the film for you. This is a very well done audio presentation that has dynamic range with the sound effects and a lot of panning from speaker to speaker. Dialogue is clean and crisp through the center channel.
Audio Quality: 9/10

All special features are presented in high definition and a second disc with the digital copy is included.

‘The International’ is a decent film that became even more enjoyable with Clive Owen. I didn’t feel that Naomi Watts was used enough or even in a way to highlight her talents. On Blu-ray the video and audio presentation are superb. I recommend this as a rental for those curious, you will get a night of solid action.
Overall Rating: 8/10