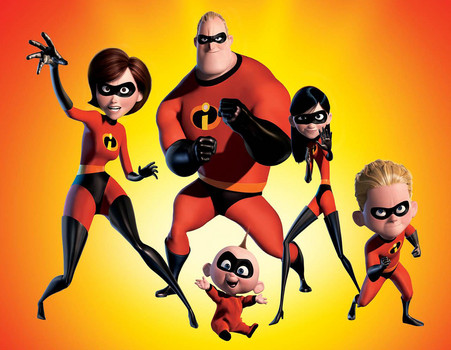 Animation studio Pixar (creators of Finding Nemo and Toy Story) reigns supreme: The Incredibles is another stunning example of their inspired storytelling and technical prowess. In a world where superheroes have been outlawed, the former Mr. Incredible (voiced by Craig T. Nelson) and Elastigirl (Holly Hunter) struggle to raise a family (with a teenager daughter who turns invisible and a super-speedy boy) while keeping their powers under wraps–but into their lives comes a supervillain with a particular grudge against Mr. Incredible. The Incredibles mixes comic book battles with middle-age crisis to daffy, delightful effect. Not only is the movie a dazzling visual experience, but the same care Pixar and writer/director Brad Bird (The Iron Giant) pay to visual details gets applied to the narrative as well. It’s deeply satifying to see a movie where every turn of plot has been given as much attention as the blazing explosions. 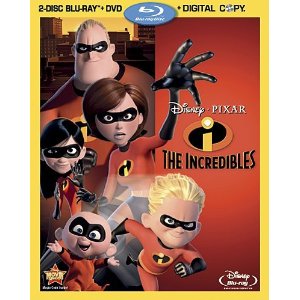 Pixar’s movies are relatively few and far between but when they do come, they are absolutely incredible and that also implies with their sixth animated feature entitled “The Incredibles” and while I may find it to not quite be on the level of like “Monsters Inc.” or “Finding Nemo”, “The Incredibles” is once again another touch down for the animators at the Pixar Studio.

A superhero who goes by the name “Mr. Incredible” has been on the superhero job for a long time and has been saving lives and saving the day many times over but has been suffering emotional burnout over the many times that when he saves the world, the world is in jeopardy almost immediately afterwards. After a rescue attempt in which he is sued by the guy he saved who actually was trying to end his life, the saved guy who is injured and in great pain sues Mr. Incredible and a wave of public backlash against the superheroes of the world ensues with many superheroes all over the world being the target of numerous lawsuits. Breaking down under pressure from the public outcry, Mr. Incredible retires from the superhero business and goes into a typical life in suburbia under the name of Robert Parr. With Incredible retiring, many other superheroes are placed under government protection and are protected by hidden identities.

15 years go buy during that time Parr settles down and raises a family with his wife and three children in suburbia but life is complicated as Elastigirl (Helen Parr) juggles family life with keeping superhero powers secret but then it really hits the fan when Robert Parr is forced to return to the superhero business and Parr who dons the uniform for the first time in more than a decade goes on a top secret mission to fight against a dangerous robot and is sidelined when a renegade menace named Syndrome who was actually a die-hard fan in the past plots to destroy the former Superheroes as well as his former idol.

Now the whole family must go over the to island where Mr. Incredible is held prisoner at and bring an end to Syndrome’s nefarious anti-superhero plot before the robot wreaks massive amounts of havoc and destruction on Metropolis.
Movie Quality: 9.5/10

The print is presented in 1080p/AVC MPEG-4 with a 2:39:1 aspect ratio. this is probably the best video version to date as the Blu-ray really shows off the vibrant colors of the film. Hair strands are much more notable, but also the detail of the fabric of the clothing is also much more present and detailed that you can see the actual stitching. Blacks are inky and deep and the special effects absolutely look awesome. And while I didn’t see any compression artifacts or any major defects on the picture quality, I did notice very little banding. In one scene, where Mr. Incredible shows off his new red costume, you can see a little banding but really, this is the best I have seen of “The Incredibles” by far. From the debris, to the presentation of the city and jungle landscape, this film looks awesome on Blu-ray!.
Print Quality: 9.5/10

The audio is presented in a DTS-HD MA lossless 5.1 mix. And if there was one thing that really shined for this film on Blu-ray, it was the lossless soundtrack as not only was dialogue crisp but every sound and boom, you can feel it via LFE. I love action films that know how to use the LFE and really make you fel it and in this case, “The Incredibles” delivers! Also, the surround channels are well-utilized as you can hear various ambiance from surrounding objects to little rustling that can be heard as well. Literally, the lossless soundtrack delivers in immersive sound that really gives you a feeling of the action that is taking place! Awesome! After watching “The Incredibles” so many times on DVD, the soundtrack, while very good, never made me take notice as it did with it listening to it on Blu-ray. Not only was this lossless soundtrack magnificent, it definitely make a big difference during my viewing and enhanced my love for the film. Audiophiles will love the lossless soundtrack!.
Print Quality: 9.5/10

“The Incredibles” is the fastest paced Pixar animated movie that I’ve ever seen and like the five Pixar movies before then, this animated feature continues the streak of unparalleled originality that only Pixar seem to generate and bring to the big screen. While not on the `wow’ scale of “Monsters Inc.” or “Finding Nemo”, the animation is great and unparalleled. Who knows what Pixar will come up with next. Go buy this movie today! It’s worth the money.
Overall Rating: 9.5/10