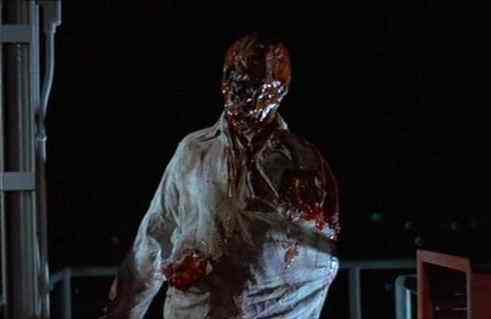 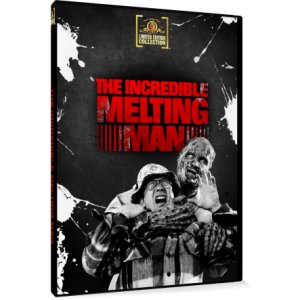 Space shuttle pilot survives a near-fatal dose of radiation, but finds that his flesh is melting, and this inversely increases his hostility. After catching a glimpse of his disfigurement in the mirror, he becomes enraged. You’d become unhinged too. Despatching the nurse (who does the longest slow-motion panicked run in film history) he escapes, then awkwardly stumbles across the landscape, disintegrating and dismembering until his inevitable conclusion.

While star-billed, Rebar has little to do, and is unrecognisable beneath Rick Baker’s repulsive make-up, leaving acting duties to the capable DeBenning whose ability to deliver his puerile dialogue without flinching is a testament to his dedication and professionalism. He has some crackers – my personal favourite being when he spies a piece of rotting flesh attached to a tree and on closer inspection announces despondently “Oh god.. it’s his ear”. A quality supporting cast includes Myron Healey and Michael Alldredge as the reinforcements, while Janus Blythe and Jonathan Demme appear in cameos. Exploitation aficionados might also recognise tragic Rainbeaux Smith as the model, nearing the end of her mainstream film career.

Baker’s make-up effects are spectacularly camp; the guy’s decapitated head tumbling down the waterfall is pure gold. Only the terrified expression bares any resemblance to the person off whom it was ripped, but that’s trivial. The radioactive goo that trickles off Rebar is like pizza topping; sometimes cheesy with occasional ham. What enthralls some, will appear tasteless to others, but credit where it’s due, Baker has done an outstanding job.
Movie Quality: 5/10

Just enjoy this silly horror gem and try to switch off your brain activity as much as you can because, if you start contemplating about the many stupidities in the script, you’ll miss out on all the campy fun!
Overall Rating: 5/10