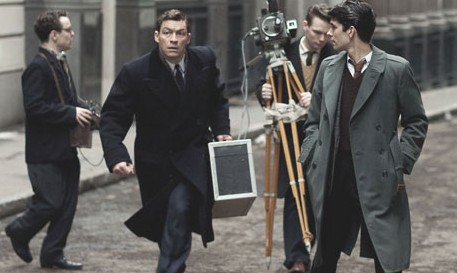 Looks can be deceiving. Often compared to Mad Men, Abi Morgan’s stylish, smoke-filled series plays more like a cross between the BBC’s State of Play and Broadcast News. Instead of an ad agency, the 1956 debut of a Panorama-like show called The Hour provides the hub around which the action revolves. Working-class Freddie (Bright Star‘s Ben Whishaw, wiry and intense), the journalist, prefers hard news to society fluff, and enjoys a snappy rapport with comely producer Bel (Atonement‘s Romola Garai, looking much like a Hitchcock heroine), but her heart belongs to Hector (The Wire‘s Dominic West), the well-connected anchor, who doesn’t let his marriage to Oona Chaplin’s socialite stand in his way. When a friend informs Freddie that there’s more to a subway murder than meets the eye, he becomes as obsessed with the case as with his new job. As Freddie’s inquiry catches the attention of MI-6, other characters come to light, like an anxious actor (Sherlock‘s Andrew Scott), a weasely watchdog (Julian Rhind-Tutt), and a shady translator (Torchwood‘s Burn Gorman, chilling). While the battle for Egypt becomes the top story, two more Londoners die under mysterious circumstances. These seemingly disparate developments will converge in the surprising finale. In the featurette, Morgan describes the show as a look at the decline of the British Empire. Adds West, “There’s a nice sort of chemistry between us all.” It comes across onscreen, and Anton Lesser and Anna Chancellor, who play two of his colleagues, also deserve praise for their stellar support. With its Saul Bass-inspired credits, finger-snapping theme, and amazing outfits, The Hour feels like Masterpiece Theatre by way of Ian Fleming. 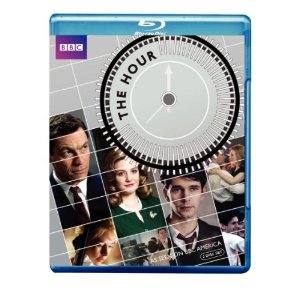 The Hour is currently being shown on BBC America, and the important thing I wanted to let people know about is that if you are not very happy with what you have seen on BBC America, don’t blame it on the drama. In the UK, the length of each episode (without commercials) is 60 minutes. On BBC America, the episode WITH COMMERCIALS is squeezed into a 60-minute time slot. If you feel that you are missing something (approximately 10 minutes?) while watching it on BBC America, YOU ARE, and the drama suffers accordingly. The good news is that this DVD contains the full episodes.

I enjoyed watching this mystery (the full episodes). The drama unfolds well, and the cast is excellent. I can’t say enough about the cast. I would watch any show with only one of the following actors: Ramola Garai, Anna Chancellor, Jamie Parker (Scripps from The History Boys), Juliet Stevenson, Tim Pigott-Smith, or Julian Rhind-Tutt. Lucky for me that they all are in this series. There are many other recognizable and talented actors (aka Masterpiece alumni): Dominic West, john Bowe, Andrew Scott and Nicholas Woodeson. While I was not familiar with the Ben Whishaw’s work, I will now add him to my list of must view actors.

My engagement in the drama grew throughout the six hours. By the end, I had to know how it was going to turn out. My only criticism is that it leaves a lot of loose ends on what happens to the people involved in the drama. Presumably, this allows more freedom for the second series, which has been approved by the BBC, but it bothered me. Still, I gave it five stars. I did like the mystery and its solution.

I guess I can’t blame BBC America for thinking that it can cut 10 minutes or so out of each hour. PBS does it with Masterpiece, and I was shocked to read that the Torchwood: Miracle Day is 60 minutes in the UK and only 50 minutes on Starz. That really upsets me. At least PBS’ Masterpiece is free. I pay a lot of money each month to watch truncated shows on Starz? What is this world coming to? So much for the free market and capitalism.
Movie Quality: 9.5/10

It’s very important to view the show as a typical mystery. Historical mysteries are very popular today, and that includes mysteries that take place in the 1920s, 40s or 50s. As a historical mystery, this is one drawer below the top.
Overall Rating: 8/10