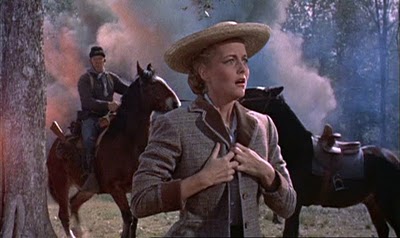 There’s a certain amount of bombast in the running arguments about wartime ethics between Marlowe and the new regimental surgeon (William Holden), who don’t take to each other at all. But Ford more than makes up for it with such tasty scenes as an encounter with a couple of redneck Rebel deserters (Denver Pyle and Strother Martin), an ethereal swamp crossing led by a cornpone deacon (Hank Worden), and above all the famous skirmish with a hillside full of grade-school cadets from a venerable military academy. The film ends rather abruptly because Ford abandoned a climactic battle scene–the veteran stunt man and bit player Fred Kennedy having been killed in a horse fall. Golden-age cowboy star Hoot Gibson, who acted in Ford’s directorial debut, Straight Shooting, appears as Sergeant Brown. 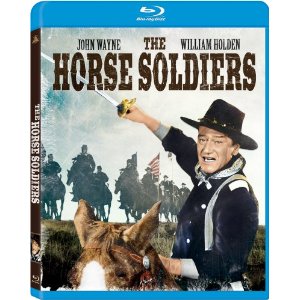 To many who look at John Wayne as a one dimentional jingoistic actor this is likely the first film I would show them to change their mind. It is a fine war movie with some great battle scenes, yet it never fails to take away from the viewer the message that war is a terrible thing.

This film adaption of the Grierson’s raid during the Vicksburg campaign gives us a close up look at the pain that war causes. Historical license it taken often Grierson the music maker becomes Marloe the engineer. Several battles are added to spice up the script, and the inclusion of the use of the Cadets harkens to a fameous battle a year later in Va.

It also give us pleanty of good subplotting in the roles, both in the ranks particlarly Sergeant Major Kirby who is loads of fun, and among the officers. It also contains some classic lines between Holden as a doctor who is regular army but a doctor first and Wayne a commander who doesn’t like war, doesn’t like doctors but does what needs to be done. “…the coffee tastes better when the latrines are dug downstream. How do you like your coffee Col?” as usual the actors who I refer to as the “John Wayne Guild” do their usual good supporting jobs.
Movie Quality: 9.5/10

The print is presented in 1080p/AVC MPEG-4 with a 1:85:1 aspect ratio. This is one of the latest wave of MGM releases that have had subpar video quality. I won’t say that I was overly disappointed with this print but compared to other films in this era MGM could have done more. While colors are strong and accurate looking they do appear rather soft throughout. Blacks are deep. There is a fine layer of grain. The print is not pristine as there are times where there is white speckles and a bit of dirt. Details and clarity is decent and really helps with this 1080p transfer for larger screen viewings. If you already own this on DVD, and are a fan of the film upgrading to the Blu-ray version would be recommended.
Print Quality: 7/10

The audio is presented in a DTS-HD MA l0ssless mono mix. MGM did also restore the audio in its mono format. This is something that will for sure please purists. This is a film that will not rock the house from an audio standpoint that won’t take advantage of the soundfield. Dialogue is not as clean as I would have hoped with tons of crackling throughout..
Print Quality: 8.5/10

In closing it is the interaction between Wayne, Towers and Holden, combined with the painting of war as something to be avoided that makes this movie a five stars classics vs just another John Wayne movie.
Overall Rating: 6.5/10