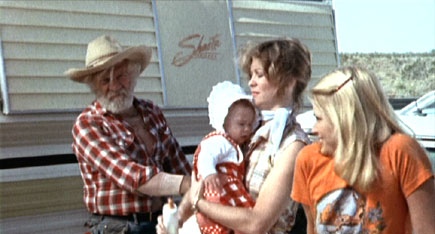 The Carters are an all-American family on their way to California when their car breaks down far from civilization in the remote southwestern desert. But they are not alone. Watching from the hills is a very different kind of clan, a family of marauding inbred cannibals with an unspeakable taste for human flesh and monstrous brutality. In the nightmare that follows, what depravities must this wholesome family endure to survive? And in a primal wasteland ruled by lust and rage, who will become the most shocking savages of all? Dee Wallace, James Whitworth, Susan Lanier and Michael Berryman co-star in this disturbing cult classic written and directed by horror-master Wes Craven. 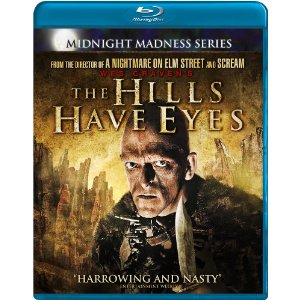 ‘The Hills Have Eyes’ is a great horror movie is all about and that’s why remakes actually make money(actually most of them lose money) I’ve said this before and I’ll say it again, anyone that knows anything about horror movies realizes there is much more to it than pretty people on screen, loud bangs and CG effects. Craven’s story about a family on there way to California stop off in the middle of the desert looking for silver. When their Vehicle breaks down they are in for the fight of their lives. A cannibal family living in the hills see a means to survive and plan on feasting on the “fresh meat”.

If the film had a bigger budget you can just imagine how much more they could have done with the look of the characters. What impressed me the most about this was its overall message about civilization. You ever notice not just in films but also in real life that people will go out of their way to do whatever they can to protect a loved one? I think that aspect is greatly shown in this film. Not only does the family in this picture fight back but you start to see a turn, or switch between the character roles. Eventually the hunters become the hunted and with the ending it showed you that the most civilized can be the most savage. Although I did like the message in the ending I thought the film could have went on a little longer. The movie just seemed to end very fast and when it did end I was puzzled saying to myself “is that it?”. I thought the ending could have been longer or at least included some more scenes to show what happens later with the characters who survived.
Movie Content: 10/10

The print is presented in 1080p/AVC MPEG-4 with a 1.85:1 aspect ratio. I am a huge fan of the original ‘The Hills Have Eyes’ film and so happy to finally see this in high definition. The film was cleaned up considerably upon release on DVD a few years ago by Anchor Bay. ‘The Hills Have Eyes’ was filmed on a shoe string budget. This print looks slightly better than the previous DVD release. This transfer does offer some excellent clarity and definition. There is also print damage which I would have expected to be cleaned up. This print damage is in the form of white specs, yes, those dreaded specs. There is some slight DNR to clean up the print which is not excessive.
Video Quality: 8.5/10

The audio mix is presented in DTS-HD MA lossless 6.1 lossless track. ‘The Hills Have Eyes’ has a nice mix between dynamic and dialogue driven scenes. The score takes advantage of the DTS-HD MA lossless 5.1 mix filling the entire soundfield. Sound effects fill the surrounds pouring into the soundfield. Dialogue is centered properly through the center channel providing a nice deep clarity. During dialogue driven scenes, this is very important on the depth as I have seen with a few DTS-HD mixes lacking dialogue depth.
Audio Quality: 8.5/10

Nonetheless, most of ‘The Hills Have Eyes’ is quite entertaining and very tense, at times scary as well. It’s strength lies within its study of the fine line between human behavior and animal instincts, which the human characters show just as much as the cannibals. Worth a viewing if you’re a fan of Wes Craven, ‘The Hills Have Eyes’ should mostly keep you very entertained, even if the ending leaves a bit to be desired.
Overall Rating: 8/10