Posted in DVD Reviews by George Theofanopoulos on 13 June 2011 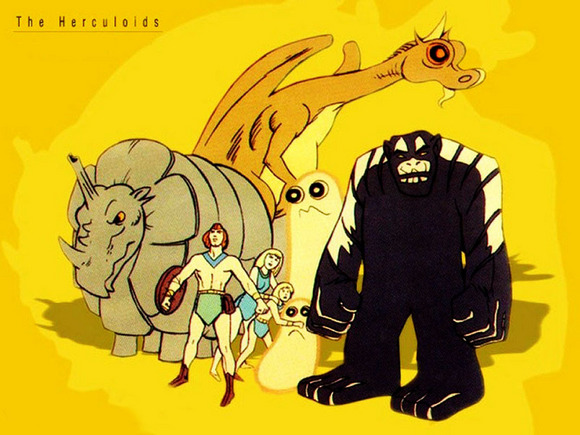 We told you this was on its way, and now Warner Archive and WBshop is exclusively accepting pre-orders (see the button link below) for The Herculoids – The Complete Series on DVD. Part of their MOD (manufacture on demand) program, this 2-disc set includes all 18 episodes AND a bonus 4:33 Featurette: “The Herculoids: First Family of Planet Quaser”. Purchased made in advance will begin shipping on June 14th, and the cost is $29.95 SRP. We try to NOT keep mentioning this for ever WAC release, because it gets old for many of our readers (plus it’s noted in the WBshop listing), but just to bring it up again: due to restrictions beyond Warner’s control. 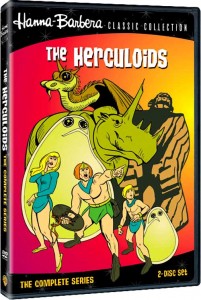 Somewhere out in deep space – and out of the creative imagination of the animation aces of Hanna-Barbera Studios – live the Herculoids. Humanoid Zandor, along with his wife Tara and son Dorno, lead a group of unique creatures: Zok the flying dragon, powerful simian Igoo (who possesses rock-like skin), rhinoceros hybrid Tundro and two protoplasmic wonders appropriately named Gloop and Gleep. Together, they use their diverse super strengths to defend their utopian planet against attack from such sinister invaders as the Pod Creatures, the Reptons and the Mutoids. For all-family entertainment, this 18-Episode, 2-Disc Collection of The Herculoids: The Complete Original Animated Series is out of this world, literally.

The Herculoids battled to defend their planet from menaces on Amzot/Quasar and from outer space. All of the Herculoids displayed Human-level intelligence – employing precision teamwork and complex tactics – as well as emotions, and Zandor and Tarra both displayed a working knowledge of complex alien technologies as well as the ability to pilot interstellar spacecraft—but essentially, Zandor, Tarra, Dorno, and the Herculoids were fighting to keep Amzot/Quasar a technology-free, primitive planet. This is further indicated by the pseudo-barbarian outfits of Zandar, Tarra, and Dorno and the fact that technology was used mainly by the various villains, but rarely if ever by the heroes. Although the “speech” of their companions was limited and repetitive, Zandor, Tarra and Dorno demonstrated that Gloop and Gleep, at least, had a comprehensive mode of communication, and that they could at least understand and interpret this language (c.f. “The Mutoids:” “Gleep says that the aliens who landed are attacking Dorno and Tundro”). The “voices” used in the shows were actually brief tracks supplied by two actors and reused throughout the series, in keeping with Hanna-Barbera’s thrifty ethos.

A number of episodes featured alien invaders who came to Amzot/Quasar to seek revenge against Zandor for an unspecified battle or adventure from the past. All were apparently technocratic and the alien’s grudges seemed to basically boil down to them being stymied in their attempts at bringing technology to Amzot/Quasar, which the apparently primitivistic Zandor wanted to avoid.

The show’s opening theme was a fully orchestral composition, suggesting uncommon heroism. An alternate opening theme was also utilized for some episodes. All of the show’s incidental music was recycled from Jonny Quest. In some of the seasons, the episodes opened with the following narration: “Somewhere out in space live The Herculoids…Zok the laser-ray dragon! Igoo the giant rock ape! Tundro the tremendous! Gloop and Gleep, the formless fearless wonders! With Zandor their leader, and his wife, Tarra, and son, Dorno, they team up to protect their planet from sinister invaders! All-strong! All-brave! All-heroes!! They are The Herculoids!!!”.
Movie Quality: 9/10

I am glad to finally see that ‘The Herculoids’ has made it to DVD as I have fond memories viewing this on television when I was a kid as reruns. If you are a fan, you will not be disappointed at all.
Overall Rating: 8/10