The Haunting in Connecticut Blu-ray Review 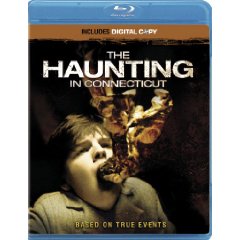 Based on a chilling true story, Lionsgate’s The Haunting in Connecticut charts one family’s terrifying, real-life encounter with the dark forces of the supernatural. When the Campbell family moves to upstate Connecticut, they soon learn that their charming Victorian home has a disturbing history: not only was the house a transformed funeral parlor where inconceivable acts occurred, but the owner’s clairvoyant son Jonah served as a demonic messenger, providing a gateway for spiritual entities to cross over. Now, unspeakable terror awaits when Jonah, the boy who communicated with the dead, returns to unleash a new kind of horror on the innocent and unsuspecting family.

The story follows a family of six in which the eldest son is a cancer victim. For convenience sake and financial reasons, the family moves into an eerie looking house that is located nearer to the hospital for a bargain. The cache is that house has a bit of history to it, but in their desperate situation the mother decides to move the family in anyway. The boy decides he wants the basement as his room, naturally the place where much of the shady past of the home took place. Strange events begin happening throughout the house, lagely revolving around the cancer-striken son as his behavior grows increasingly violent and unpredictable. Eventually the horrific story of the house begins unraveling around the family as they struggle to keep their son alive.

While this film was panned hard by critics and movie goers, I found it to be an entertaining thrill ride from start to finish. One thing that this film has for a PG-13 rating is atmosphere which is excellent, and this helps with the tone of the film. It really sets up for a creepy film that we have no seen in a very long time in America which is a shame. That PG-13 rating I believe does also hold back the film a bit from reaching its pinnacle. Hollywood needs to loosen the belt when it comes to today’s horror and allow that R rating opening up the playing field. I also found the acting to be really good here from Virigina Madson and Kyle Gallner, while the rest of the cast was passable. They were the two that helped keep the film together since they were on screen for a good portion of the film. Then add the twists and turns in the story which are executed brilliantly. If you are a fan of horror films and since this is based on a true story, you can’t go wrong especially that this does have a little bit of ‘Amityville Horror’ feel to it.
Movie Content: 9/10

The print is presented in 1080p/AVC MPEG-4 with a 2.35:1 aspect ratio. This is a very atmospheric film and it shows in the print quality throughout. I found the image to be very strong with no apparent issues. The detailed transfer is intentionally soft in some areas during flashbacks but deep colored during non flashback scenes. The yellow and brown hues are a dominant color during the flashbacks giving this film an even more creepy feel. There is CGI used throughout the film and only in a few scenes does it come off looking not implemented properly. I found mainly when the demon was coming out of it did not look quite right.
Video Quality: 9/10

The audio is presented in DTS-HD MA lossless 7.1 mix. The effects coming out of the surrounds during the horror scenes and really immerse you in the on goings of the film. The score sounds very good throughout the film. If you are an atmosphere audio enthusiast, you will fall in love with the audio in this film. The dialogue was very clean and crisp through the center channel and very well balanced with surrounds.
Audio Quality: 9.5/10

All special features are presented in high definition except for the deleted scenes which are in standard definition. There are two audio commentaries on this disc and they are very well done and informative.
Special Features: 9/10

I found this film to be very enjoyable from start to finish, albeit a few minor issues and the low point with the film is that the PG-13 rating brings the film down a notch. If you are looking for a smart, creepy, and atmospheric horror film, ‘Haunting in Connecticut’ is well worth the thrill ride. On Blu-ray the film looks and sounds very good. Fans of the film will enjoy the film in high definition.
Overall Rating: 9/10