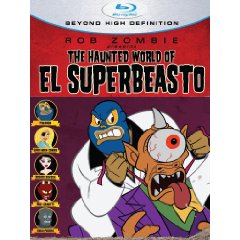 El Superbeasto aka “Beasto” is an unstoppable superhero masked wrestler, Producer/Director/Star of BeastoWorld Enterprises—and world-famous man of action! In his first full-length animated adventure based on the comic book created by Rob Zombie, Beasto and his super-sexy sister Suzi X must stop the unholy marriage of foul-mouthed stripper Velvet Von Black and diabolical Dr. Satan, or unleash all the sudsy powers of Hell! Welcome to a depraved domain of outrageous comedy, non-stop ultra-violence and bad-ass theme songs! Featuring a horde of Nazi zombie bikers, seven original songs by Hard ‘n Phirm and the voice talents of Tom Papa, Sheri Moon Zombie, Rosario Dawson, Brian Posehn and Paul Giamatti as Dr. Satan in THE HAUNTED WORLD OF EL SUPERBEASTO!

So what is Zombie’s world? It’s a world filled with over inflated breasts, strippers, crooks, monsters, masked wrestlers and more. In short, all the things that most exploitation film makers try to overcome. Instead, Zombie embraces these points from those films and puts them to use in his own movies, not always to the benefit of the project at hand.

When not fighting crime or making movies, El Superbeasto tries to hit on anything in a dress and in possession of Dolly Parton size breasts. Such is the case when he spies a new stripper at his favorite club named Velvet Von Black (Rosario Dawson). But she’s caught the eye of another person as well, the evil Dr. Satan (Paul Giamati) who intends to make her his bride thus fulfilling a prophecy that will grant him enormous power.

Thinking back to watching this the fact is I truly wanted to like it. And moments I did actually do so. But on the whole it failed to deliver for me. Was I offended? No, but anyone with children should be aware this is definitely NOT a kids film. Was I entertained? At times but not the entire length of the film. Would I recommend it? Only to die hard fans of Rob Zombie or people who are fans of horror film tributes, schlock films and exploitation films.
Movie Quality: 6/10

The print is presented in 1080p/AVC MPEG-4 with a 2.35:1 aspect ratio. Due to the film being an all digital transfer, the animation looks greatb. The colors are rather well saturated. The image is clean throughout and the addition of excellent details is a nice touch with close up scenes. Violence for an animation never looked so gruesome in high definition.
Video Quality: 9/10

The audio is presented in Linear PCM 5.1 mix. I found the audio to be pretty good and impressive. The film takes advantage of the rears with all kinds of sound effects across the soundfield. The rears did get a good amount of usage than I expected. Dialogue comes through the center channel very clean and crisp.
Audio Quality: 8.5/10

I am a fan of Rob Zombie’s films and music, but thought that ‘El Superbeasto’ was average. On Blu-ray the film looks and sounds great. If you are a fan of Zombie’s you might want to give this a rental.
Overall Rating: 7/10