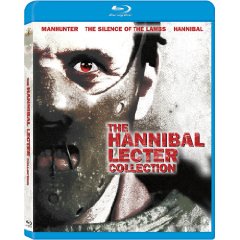 Manhunter:Though it will always be remembered as the movie featuring the “other” Hannibal Lecter, Michael Mann’s 1986 thriller Manhunter is nearly as good as The Silence of the Lambs, and in some respects it’s arguably even better. Based on Thomas Harris’s novel Red Dragon, which introduced the world to the nefarious killer Hannibal “the Cannibal” Lecter, the film stars William Petersen (giving a suitably brooding performance) as ex-FBI agent Will Graham, who is coaxed out of semiretirement to track down a serial killer who has thwarted the authorities at every turn.

Release in 1986 to middling reviews, director Michael Mann’s third feature (following on from his TV success with ‘Miami Vice’ and big screen endeavors ‘The Keep’ and ‘Thief’) is a triumph of both style and substance. Shot with a mid 80s gloss, Mann transfers Harris’ novel to the big screen with panache and manages to wring many a scare out of the source material. The movie stars William L. Peterson as Will Graham, an ex-FBI agent who is forced out of retirement to track down a serial killer, suitably named ‘The Tooth Fairy’ (played beautifully by Tom Noonan). His only hope is to seek council with a killer he successfully captured years before . . . Hannibal Lecter (here spelt ‘Lektor’). This sets in motion a chain of events that will lead Graham to question his own talents and sanity all the way up to a dynamite climax in which graham comes face to face with The Tooth Fairy himself.

The Silence of the Lambs: Based on Thomas Harris’s novel, this terrifying film by Jonathan Demme really only contains a couple of genuinely shocking moments (one involving an autopsy, the other a prison break). The rest of the film is a splatter-free visual and psychological descent into the hell of madness, redeemed astonishingly by an unlikely connection between a monster and a haunted young woman. Anthony Hopkins is extraordinary as the cannibalistic psychiatrist Dr. Hannibal Lecter, virtually entombed in a subterranean prison for the criminally insane. At the behest of the FBI, agent-in-training Clarice Starling (Jodie Foster) approaches Lecter, requesting his insights into the identity and methods of a serial killer named Buffalo Bill (Ted Levine). In exchange, Lecter demands the right to penetrate Starling’s most painful memories, creating a bizarre but palpable intimacy that liberates them both under separate but equally horrific circumstances. Demme, a filmmaker with a uniquely populist vision (Melvin and Howard, Something Wild), also spent his early years making pulp for Roger Corman (Caged Heat), and he hasn’t forgotten the significance of tone, atmosphere, and the unsettling nature of a crudely effective close-up. Much of the film, in fact, consists of actors staring straight into the camera (usually from Clarice’s point of view), making every bridge between one set of eyes to another seem terribly dangerous.

The Silence of the Lambs’ is a very involved tale of an FBI academy student, Clarice M. Starling (Jodie Foster), who is sent to the cell of the famed serial killer Hannibal “The Cannibal” Lecter (Anthony Hopkins), to try to convince him to fill out a questionaire. Little does Clarice realize, the head of the Behavioral Science department, Jack Crawford (John Glen), who has sent her on this errand, really has alterior motives. He has actually sent her to get help from Lecter on tracking down a mischevious serial killer, Buffalo Bill (Ted Levine), who skins his victims. Clarice meets with Lecter to find he is an evil raving genius who is always a step ahead of the game and always prying into the mind of anyone he meets. Clarice is given a lead about Buffalo Bill by Lecter and he offers more information if he can be moved to a cell with a view. Throughout the film these confrontations continue between Lecter and Starling as Starling and Crawford try to find Buffalo Bill, which turns out to be the highlight of the film. What John Demme has given us with The Silence of the Lambs is far greater then another story of a serial killer on the prowl.

Hannibal: Yes, he’s back, and he’s still hungry. Ten years after The Silence of the Lambs, Dr. Hannibal “the Cannibal” Lecter (Anthony Hopkins, reprising his Oscar-winning role) is living the good life in Italy, studying art and sipping espresso. FBI agent Clarice Starling (Julianne Moore, replacing Jodie Foster), on the other hand, hasn’t had it so good–an outsider from the start, she’s now a quiet, moody loner who doesn’t play bureaucratic games and suffers for it. A botched drug raid results in her demotion–and a request from Lecter’s only living victim, Mason Verger (Gary Oldman, uncredited), for a little Q and A. Little does Clarice realize that the hideously deformed Verger–who, upon suggestion from Dr. Lecter, peeled off his own face–is using her as bait to lure Dr. Lecter out of hiding, quite certain he’ll capture the good doctor.

However, the sequel is still good, but it is a little bit dissapointing. Hannibal has escaped and he is living in Italy. Ever since the last time, Clarice Starling encountered Hannibal, he has in a way cast a spell on her. She comments saying(“I think about him for 30 seconds every day”). She isn’t doing so well, she is asked to take time off from her job of being a cop, mainly because Clarice messed up an investigation. Hannibal is still living his life, he is very interested in art and he does teach a seminar to other people..
Overall Package: 9.5/10

‘Manhunter’ is presented in 1080p/AVC MPEG-4 with a 1.85:1 aspect ratio. Out of the entire set, this is the most eye pleasing transfer with a consistent image quality. Colors are vibrant and bold throughout the entire film. Details are very well captured for a film that is 23 years old. Grain is intact and holds a consistent look throughout. Fans of the film will not be disappointed at all.

‘Hannibal’ and ‘The Silence of the Lambs’ are presented in 1080p/AVC MPEG-2  with a 1.85:1 aspect ratio. I have owned ‘The Silence of the Lambs’ several times on VHS and DVD. Finally this film looks great on home video, yet there are issues with the print. After a 1.5 year delay, it finally makes its debut to Blu-ray. One of the problems is that the film is on a single-layer BD25 with a MPEG-2 codec which at times looks like an upconverted DVD. There are other times where up close scenes look very good when the camera is up close. Black colors are deep. Colors look much more natural than they ever have on VHS or DVD. These are the few redeeming qualities about the print. The print is not pristine as there are a few specs of dirt. The noise levels are kept at a minimum never getting intrusive. I hope that MGM will revisit this film in the near future giving it proper treatment since this film can look even better. For fans of the film you will be happy with the quality of the print.

With ‘Hannibal’ being only a few years old, I had expected more from the print but when I found out that it was an MPEG-2 encode I was not expecting much. This print is much worse than ‘The Silence of the Lambs’ which suffers from dull colors and lower quality details.
Video Quality: 7/10

The audio is presented in DTS-HD MA lossless 5.1 mix. For all three films dialogue is centric and the main focus. For those going in expecting an intense and complex audio experience you might be a little disappointed. There are some effects that peer through the rears providing some ambiance into the soundfield. While this is not a bombastic soundtrack, it is the best that these films have sounded for home video.
Audio Quality: 8/10

There are no special features for ‘Manhunter’ and ‘Hannibal’, which is a real shame considering that the DVD sets for both had a healthy amount of features.

The Silence of the Lambs

All special features have been ported over from the previous 2-disc DVD edition. There are three features that are available in high definition, with one of them being the new feature “Breaking The Silence”. This is a PIP trivia track that fans of the film will enjoy.

I love this entire franchise and we are two more films away from having all 5 film on Blu-ray in high definition. ‘Manhunter’ encompasses the best video quality out of the entire set, while ‘Lambs’ and ‘Hannibal’ would benefit from a full remastering. If you are a fan of all three film this is a no brainer to add to your collection.
Overall Rating: 8/10