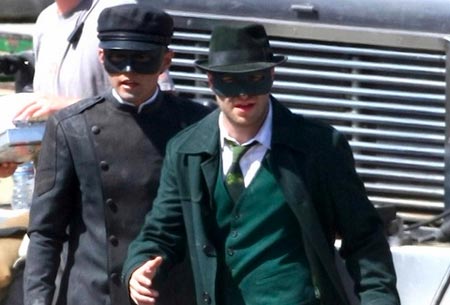 The buzz around The Green Hornet comes from the collision of weird talents involved: Seth Rogen plays the crime-fighting hero and writes the movie with his Superbad bud Evan Goldberg; pop star Jay Chou plays Kato; and the whimsy-headed Michel Gondry directs. Toss in Inglourious Basterds Oscar winner Christoph Waltz as a super-villain highly self-conscious about his brand, and you’ve got a blockbuster that definitely isn’t going for the normal. And for a while, the movie’s Apatovian comedy and bromantic tendencies supply some definite fun; plus, Waltz and his double-barreled revolver (along with an uncredited cameo by James Franco) launch the picture with a giddy opening action sequence. At some point, though, you want all this stuff to mesh, and The Green Hornet keeps zipping about in three directions at once, never quite maintaining its early comic zip, but not grounding itself in an engaging enough crime-fighting plot, either. And there’s little to do for nominal female lead Cameron Diaz; although both millionaire playboy Britt Reid and Kato make half-hearted passes at her, it’s clear their main interest is each other. You just knew a franchise that began as a radio serial in the 1930s (and took a brief but memorable detour into TV in the ’60s) would end up being part of that unavoidable 21st-century genre, the male-bonding comedy. Of course, it’s really a triangle. Their boss car, Black Beauty, also gets a lot of love. 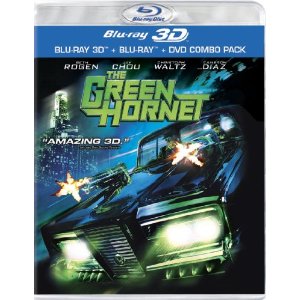 In the sixties the comic book icon Batman was turned into a television series that was low on detective seasoning and high on camp. The show became so popular that it was soon followed by a spin off, The Green Hornet, based on the pulp fiction/radio show character from the past. The show never took off like Batman did, but it did introduce the world to martial arts expert Bruce Lee as the Hornet’s sidekick Kato. Talk of a new film version of the series went on for years, even Kevin Smith the director of CLERKS was involved at one point. So fans were delighted to see the Hornet finally appear on the big screen.

Seth Rogen stars as Britt Reid, the goofball son of publisher James Reid (Tom Wilkinson). The senior Reid puts out The Daily Sentinel, a newspaper that prides itself on reporting the real news and focuses on the issues of crime that happen daily in Los Angeles. When suddenly dies of a bee sting, Britt is left in charge as well as left to finally grow up.

Despondent at first and unable to fill his father’s shoes, Britt turns to the man who took care of his father’s cars and who made his coffee, Kato (Jay Chou). In Kato he discovers a kindred spirit; someone who loved yet felt much anger at his father and a man who feels a need for heroes much as Britt does.

Through a misadventure in which they save a couple from an attack by thugs, the pair decides to take on crime in LA. Kato sets out pimping their ride, a car now armed to the gills with missiles, machine guns, a flame thrower and more. Then Britt turns the newspaper on its ear, insisting that they do extensive coverage of the Hornet, going so far as to come up with his name. The next thing they do is hire an assistant for Britt, Lenore Case (Cameron Diaz), who knows more about crime than he does, going so far as to predict what the Green Hornet will do next. In truth, her predictions become their directions.

It seems that the entire criminal element in LA is run by one man, Benjamin Chudnovsky (Christoph Waltz), a bloodthirsty criminal who has made it his life’s ambition to control crime from top to bottom. Chudnovsky makes a point of striking fear in those who would oppose him. And when the Green Hornet starts interfering with his operations, the Hornet becomes his number one target.

So does it work? In some ways very much so but in most not quite. As with the recent GULLIVER’S TRAVELS, we’re presented with a star that needs someone to rein him in, to mold him into the character rather than have the character twist into something its not. Rogen can be a great actor at times but here he tends to run wild and use certain mannerisms that he has in past roles, none of which tend to enhance the character of Britt Reid. Instead much of the movie has Britt as the same goofball he was when the film started except rather than party non-stop he behaves like a kid who finally gets the chance to play the hero. It would have been nice to see the change in Britt come about far earlier in the film than it does and to have left more of the comedy out. The story deserves more action and less comedy.

Chou does a great job of presenting himself here. Pretty much an unknown in the U.S., he does a fantastic job of combining martial arts mastery with acting ability, much like Bruce Lee did when first starting out. The scenes with Chou feel more like the Green Hornet than do those with Rogen.
Movie Quality: 7/10

The print is presented in 1080p/AVC MPEG-4 with a 2:40:1 aspect ratio. The print looks very good throughout without any apparent issues. Colors are vibrant and carry pop which brings out the fine details. The detailed scenes stand out very well. Blacks are deep. I found the print to be crystal clear with no artifacts or print damage. The darker scenes of the film looks great with the appropriate lighting making this science fiction film standout. This is almost demo worthy print.
Print Quality: 9.5/10

The audio is presented in a DTS-HD MA lossless 5.1 mix. This is yet another impressive audio mix on Blu-ray, taking advantage of the film’s sound design. I was immersed at all time throughout no matter if it was special effects or dialogue. The depth of the dialogue is well done through the center channel sounding very clear and crisp. The action sequences sound nice and expansive in the sound field with plenty of special effects in the soundfield.
Print Quality: 9.5/10

Much of the film comes together towards the last 20 minutes or so. It would have been nice to see many of the things that work well there happen 30 minutes earlier and the movie be taken a bit more seriously than it was. Instead, while entertaining enough, the film seems more like a Seth Rogen vehicle and less a comic hero film.
Overall Rating: 8/10

« Lemonade Mouth DVD Review
The Glades The Complete Season One on DVD June 14, 2011 »