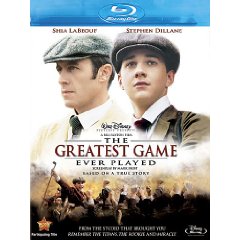 You wouldn’t think a movie that uses the game of golf as a metaphor for class struggle could be so entertaining. The Greatest Game Ever Played stars the charming Shia LaBeouf (Holes) as Francis Ouimet, a golfer who, in 1913, rose from caddy to U.S. Open champion at the age of 20–despite the resistance of the powers that be, who thought it unseemly for a lower-class plebian to play the sport of gentlemen. Ouimet’s main competitor is Harry Vardon (Stephen Dillane, The Hours), a British professional, still considered one of the greatest players of all time, who fought his own class battles. The two go head to head in a genuinely gripping match, deftly balanced against the juxtapositions of their personal struggles. Is it sentimental and formulaic? Is the outcome a foregone conclusion? Yes, but it doesn’t matter–formulas exist because, when executed with verve and dexterity, they work. Bill Paxton, best known as an actor (One False Move, Apollo 13), steps into the director’s chair and hits all the right notes, aided by an excellent cast playing colorful characters, a vivid recreation of the time period, glowing cinematography, and an expert pace. The Greatest Game Ever Played works.

I knew I’d like this movie because of Shia LaBeouf and Bill Paxton, both of whose work I admire. I wasn’t disappointed. Paxton manages to infuse the sport of golf (which I normally find boring beyond description) with tension, drama and interest, and Shia’s performance wins the day. It has great supporting players, particularly Josh Flitter as his spunky caddie Eddie and Stephen Dillane as golf pro Harry Vardon. The story is very uplifting and it’s Disney-fied, to be sure, but this is the rare case of a story actually deserving that slightly gooey Disney touch, since it truly is a great underdog tale. Paxton overdoes it a bit with the FX touches, using flashy camera moves at times when he could have easily played it straight, but overall he gets the job done, and gets the movie done right.

Bill Paxton is becoming one of my favorite directors in addition to being one of my favorite actors. His presentation here is very stylistic and faithful to the time in which the story takes place. The recurrent and surreal “gnat on the ball” effects might be used a few times too many, but I understand why Paxton utilized this technique. It helps legendize the tale and gives it a bit of Paul Bunyan quality. It also keeps the film from becoming too dry or period.
Movie Content: 9/10

The print is presented in 1080p/AVC MPEG-4 with a 2.35:1 aspect ratio. The film has a rather colorful and vibrant image with solid Black colors. Some of the best scenes visually are the ones filmed on the golf courses. The vegetation looked very colorful and I felt like I was standing right on the golf course with the cast. Skin tones had excellent color with some impressive details. Details are excellent throughout the entire presentation. Disney has outdone itself with this print as it was hard trying to find anything wrong here.
Video Quality: 9.5/10

The audio is presented in Dolby TrueHD 5.1 mix. This is a dialogue driven film, so this is a front heavy experience. The dialogue was clear and crisp with no apparent issues. The mix is well balanced with the low usage of the surrounds. The rears do get some use with the soundtrack, but do not offer the excellent depth. I would say that this mix was sufficient enough for this type of film.
Audio Quality: 8/10

All special features are presented in standard definition. There are two commentaries and the one with director Bill Paxton is fantastic. I have always like him as an actor and a director.
Special Features: 8/10

Despite whether it is accurate, it is a clean and entertaining movie with a message to children that if you work hard enough you can beat the odds. Disney not only delivers the goods with the story, but the video presentation is also top notch. This is a highly recommended film.
Overall Rating: 8/10