Posted in DVD Reviews by George Theofanopoulos on 12 November 2010 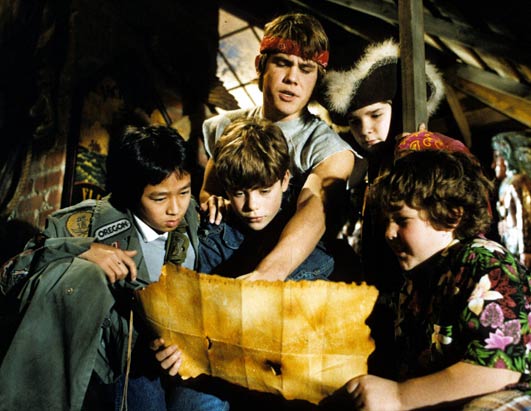 You may be surprised to discover that the director of the Lethal Weapon movies and scary horror flick The Omen, Richard Donner, also produced and directed this classic children’s adventure (which, by the way, was written by Donner’s screen-wizard friend Steven Spielberg). Then again you may not. The Goonies, like Donner’s other movies, is the same story of good versus evil. It has its share of bad guys (the Fratelli brothers and their villainous mother), reluctant-hero good guys (the Walsh bothers and their gang of friends), and lots of corny one-liners. Like in an old-fashioned Hardy Boys or Nancy Drew plot, the Goonies need to solve a problem: a corrupt corporate developer has bought out their neighborhood and plans to flatten all their homes. Luckily, the beloved gang stumbles on a treasure map. In the hopes of finding the treasure to buy back their houses, the Goonies embark on their quest through underground passages, aboard pirate ships, and behind waterfalls. This swashbuckling and rollicking ride was also a great breeding ground for a couple of child actors who went on to enjoy numerous successes in adulthood: Sean Astin (Rudy, Encino Man) and Martha Plimpton (Pecker, 200 Cigarettes). 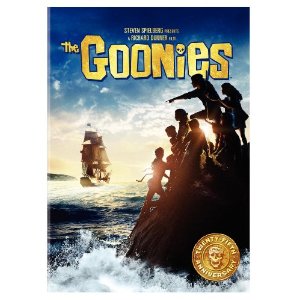 What makes this movie so great is not only the great stories, but the lovable and believable characters.

The story starts actually quite sad in that some friends are going to have to leave their homes, which of course also means leaving each other. We then have just a glimmer of hope that they won’t have to leave. (If they can find an old pirate’s treasure.) Now what is interesting here is that the hope revolves around a willingness to believe again as a child.

Now what is interesting here is that the 4 young friends set off on this journey together, and gradually, Sean Astin’s older brother, his possible girl friend, and her friend join the party. (The party started with 4 young children, and 3 older people ended up joining the party.)

They go through an interesting series of caves filled with traps in hopes of saving their homes. What is especially interesting here is that no one is there without a purpose. (Corey Feldman knows Spanish and can read the map; Data has some gadgets that may prove useful; Andy can play the keyboard at a crucial time; Brandon is a little older, so he may be acquainted with some dangers the younger crew is not ready for, etc.

Of course, we can’t have it that easy. They are later persued by 3 The Fratellis who are very bad. But they carry a charm that makes them likable despite their crimes. A signature moment is when one of the Fratellis complains that his mother always liked the other son better, and then she slaps him and says: “That’s right.”

An especially funny moment with the Fratellis is when they want their prisoner Chunk to tell them everything about the hidden treasure, but he takes it literally, and tells them every bad thing he ever did. And one of them gets interested in Chunk’s confessions and responds: “I’m starting to like this kid.”

While the movie may seem simple, it is never boring. And the delightful interaction of the characters who aren’t exactly experts, but who all have something to contribute to this journey may very well thrust this movie into the classics.
Movie Quality: 10/10

This movie brings back the joys of childhood and that sense of adventure that lived in the everyday. This movie is funny, moving, and just great family entertainment.
Overall Rating: 9/10