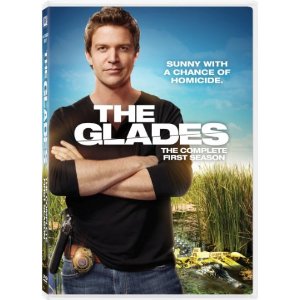 This season’s most intriguing new series comes to DVD on June 14 from Twentieth Century Fox Home Entertainment.  In “THE GLADES” The Complete First Season, fans and new viewers alike will experience the gripping mystery, complex characters and the wry humor that is “par for the course” in A&E Network’s highest rated original series.

Recently renewed for its second season, “THE GLADES” stars Australian actor Matt Passmore as Jim Longworth, an attractive, brilliant, yet hard to get along with homicide detective from Chicago who is forced into exile after being wrongfully accused of sleeping with his former captain’s wife. Longworth relocates to the sleepy, middle-of-nowhere town of Palm Glade, Florida, where the sunshine and golf are plentiful and crime is seemingly at a minimum. But this town outside the Florida Everglades isn’t quite as idyllic as he thought, as he finds people keep turning up murdered. Each case pulls Longworth off the golf course and reluctantly into his element as one of the sharpest homicide detectives in the field.