The Girl Next Door Blu-ray Review 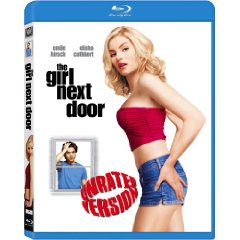 While it suffered a nearly unanimous beating from critics, The Girl Next Door attracted more than a few loyal defenders during its brief box-office lifespan. It pales when compared to its teen-comedy role model (the 1983 classic Risky Business), but you’ve got to admit that any movie about a teenager whose new next-door neighbor is a 19-year-old former porn star has bona fide cult-movie potential. To its credit, this rather schizoid blend of sleaze and comedy boasts an engaging pair of costars in Emile Hirsch (as the smitten, voyeuristic virgin) and 24’s Elisha Cuthbert (as his sexy new house-sitting neighbor). And there are some good laughs in a script that takes unexpected turns when we learn that Cuthbert’s character is trying to leave her porn-star past behind, to the chagrin of her pimp-like producer (Timothy Olyphant, in a scene-stealing role). Faring somewhat better than he did with the Rob Schneider non-comedy The Animal, director Luke Greenfield clearly recalls the turbulence that goes hand-in-hand with being young, horny, and confused. There’s honesty and even (dare we say it?) maturity to be found in this raging-hormone fantasy, even if it’s partially buried in a convoluted plot that’s appalling or appealing, depending on your tolerance for good-natured prurience.

“The Girl Next Door” is the story of 18-year-old Matthew Kidman (Emile Hirsch), a straight-laced, overachieving, good boy who has never really lived life to the fullest. That is, until he spies his incredibly sexy neighbor (Elisha Cuthbert) changing in the window, and finds that through his desire to be with her, he will do anything and everything to be with her. But, Matthew gets thrown for somewhat of a loop when he discovers that his perfect `girl next door’ is actually a former porn star, who is trying to forget about the life she used to lead. Now, Matthew’s sheltered life quickly begins to spin out of control as he attempts to help his new girlfriend leave the life she knew to embrace the life she longs for.

In the end “The Girl Next Door” is really just a love story, which will not only surprise but also disappoint those who are looking for a raunchy teenage sex comedy. Of course there are all sorts of “Risky Business” like complications involving $25,000 to bring the next Einstein to America from Cambodia and Danielle’s producer Kelly (Timothy Olyphant, in a scene stealing role) who does not like the idea of some high school boy getting his girl to give up show business. Kelly is as close as Luke Greenfield’s film gets to the sleazy side of the adult entertainment film industry, but his idea of how to mess with the kid is more creative than violent and I really did like his reaction to the twist the film takes at the end. I was wavering on whether to round up or down from the 3.5 this film was going to get from me, and that was enough to shift the scale towards the high end.
Movie Quality: 8/10

The print is presented in 1080p/AVC MPEG-4 with a 1.85:1 aspect ratio. Colors are rather dull throughout the entire presentation. This is very disappointing that colors did not receive top billing with this transfer. Blacks are rather solid. Fleshtones look very natural. I found the details to be lacking a bit due to the dull color pallette. This was a disappointing release on Blu-ray. This is not much better than the DVD release from back in 2004, I was shocked that FOX didn’t do this film justice.
Video Quality: 3/10

The audio is presented in DTS-HD MA lossless 7.1 mix. While the image has several issues, the audio fairs better. This is a front heavy presentation with the rears getting minimal usage, but it is the way that this mix is presented that won me over. I felt like the film has never sounded this good and clear especially the voices with the dialogue.
Audio Quality: 7/10

The movie was definitely at the far end of escapism with it’s mix of comedy, drama, and romance blended together but it works for this movie. I was disappointed with the video quality of the film as it is not much better than the 2004 DVD release. I have a hard time trying to recommend this as a purchase to those that already own the film on DVD.
Overall Rating: 6.5/10