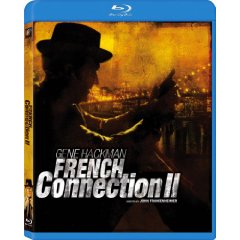 In a sequel that fans dismissed and written off by critics, ‘The French Connection II’ is in some ways a better film than the original. The sequel is much better because the character of Popeye Doyle gets more depth as it allowed Gene Hackman to do more with his persona. This time John Frankenheimer steps in the seat of the director chair. Frankenheimer give the sequel a much more stylized look and feel retaining the grittiness approach by William Friedkin from the original. I will say that I enjoyed the sequel much more than the original.

In the sequel, Popeye Doyle (Gene Hackman) continues to go after his returning arch nemesis Fernando Rey. This film sets for a darker tone overall as the film progresses due to Doyle being forced into a heroin habit. It becomes a tad bit disturbing for my liking, but things do take a different direction with the finale. This film is so different from the first one is the amounts of various challenges that Doyle encounters along the way. It helps setup a sense of excitement for the viewer with each one of the challenges making you wonder what will Popeye due to overcome this issue.

The one area that I found the film lacking in has to be that there are no good supporting characters. Roy Scheider’s character was great and is missed here which causes this to be the Hackman or Popeye Doyle show. In some ways this is not bad as mentioned above since it allows for Hackman to build his character even further. In other ways it is rather difficult for one actor to hold the weight on their shoulders. Hackman pulls it off due to his excellent acting abilities.

Fans of both films will really be happy with the ending as it is lead up to by another excellent chase scene. This is one area that I miss in many of today’s action packed film’s where their chase scenes are completely lacking intensity and pursuit that has the viewer on the edge of their seat.
Movie Content: 4/5

The print is presented in 1080p/AVC MPEG-4 with a 1.85:1 aspect ratio. Frankenheimer has retained some of Friedkin’s visual style, except the image is consistent throughout the film unlike the original. The image is very colorful helping out the image tremendously as the original film colors were muted. Black levels are deep. Grain is present, except it is very subtle and could go unnoticeable to some. The print has been cleaned up for the most part, with only a few scenes carrying a few specs of dirt. Details are also very well apparent.
Print Quality: 4/5

The audio is presented in DTS-HD MA lossless 5.1 mix. While the image looks much better with the sequel, the audio still has some of the same issues such as the problem with gunshots; certain sound effects are way to powerful. I found depth to be lacking overall in the soundfield. There are no sound effects from the rears at all. I would have preferred that they would have just gone with a lossless mono track as it would have fit perfectly. Don Ellis returns providing the score for the film which in some ways is different from the score he composed in the first film.
Audio Quality: 3.5/5 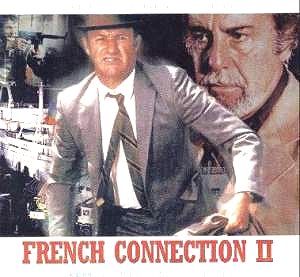 In some ways I found ‘The French Connection II’ to be a better film than the original due to opportunity for Gene Hackman to shine. It hurt the film a little bit without having a strong supporting cast. On Blu-ray the film looks great visually, but lacks in the audio department. For fans this is a definite upgrade for the image quality and special features in high definition.
Overall Rating: 4/5