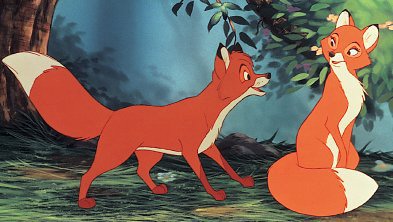 Disney proudly presents its 24th full-length animated film — hailed as “vintage Disney” by The Washington Post. This highly acclaimed classic blends vibrant animation and breathtaking action to tell the story of two best friends who didn’t know they were supposed to be enemies. The fun and adventure begin when a lonely widow adopts an orphaned fox cub named Tod. The mischievous fox soon meets up with Copper, an adorable hound puppy. As the innocent pair grow up together in the forest, they become inseparable friends. But the day soon arrives when their friendship is put to the ultimate test! “Echoing the dramatic moods and imagery of BAMBI and LADY AND THE TRAMP” (Seattle Times) — and reflecting such timeless values as love, courage, and respect for life — THE FOX AND THE HOUND has captured an honored place among Disney’s most beloved and endearing animated classics.

The Fox and the Hound

The Fox and the Hound was probably somewhat of a crossroads for Disney studios. The last of the old animators left with this underrated gem. It doesn’t need to bombast young viewers with unnecessary action or dumbed down pseudo-epic storylines to attract attention. It’s simply the story of a friendship that manages to transcend nature’s dictations and any trials thrown at it.

This is a tale told with such heartfelt sincerity that it moves and touches viewers with its story alone; no need for semi-Broadway moments every ten minutes or cheap, carefully masked lewd humor sprinkled in for potential bored adults. The characters are endearing and artlessly likeable, and the lessons learned are timeless.

There are engagingly subtle touches that augment the main story, such as the ongoing battle between two determined birds (one with a curiously Brooklyn accent) and one very lucky caterpillar. The conclusion to this humorous yet strangely realistic chase is a startlingly touching revelation in beauty. This is Disney at its best: a simple and touching movie that doesn’t need anything else to make itself an enjoyable experience for everyone. Even the greats of the 90s seem a little cheap after this.

Fox and the Hound II

The oddball relationship between Tod the Fox and Copper the Hound has stood the test of time as a favorite for kids. Twenty-five years later, the sequel was made and the decision was to pair it with the country music market. That choice has worked magic, bringing a lively soundtrack to a great romp of a tale that plays off the original characters and situations in a way that makes it feel like only days have passed instead of years.

Country music legends Reba McEntire and Jeff Foxworthy head up the cast of voice talent. They’re joined by Patrick Swayze, who even joins in on some of the songs.

Although this time out the tale feels a little too familiar (two friends busted up by one friend’s drive for fame), the fun that came alive in The Fox and the Hound strikes again. The chases that occur throughout the film are a delight to watch. One thing always leads to another, and chaos just builds and builds till Tod and Copper look around in shock at all they’ve unwittingly destroyed. The camaraderie between the two is great, and Reba and Patrick’s addition to the cast is well done for the most part.

The only thing that slows the movie down somewhat is the deepening of the relationship issues between Dixie (Reba McEntire) and Cash (Patrick Swayze). That subplot comes on a little too strong and steals too much of the movie occasionally.

The Fox and the Hound 2 is definitely a keeper, one that belongs on the family DVD shelves. Sometimes sequels don’t equal the originals, but this one comes close, and it provides a whole new musical sound that is heartwarming and makes you want to get up and dance. Little Big Town’s “When We’re Together” is pure dynamite.
Movie Quality: 9/10

The print is presented in 1080p/AVC MPEG-4 with a 1:66:1 and 1.78:1 aspect ratio. The original ‘Fox and the Hound’ doesn’t quite fare well as I would have hoped based on previous releases of older titles to Blu-ray. There are several issues with color throughout and issues with contrast. Then add black levels that are way too much for the image that they look to over take the entire image. There is also print damage throughout which never seems to die down. Fox and the Hound 2 fares much better than the original release on Blu-ray.
Print Quality: 9/10

The audio is presented in a DTS-HD MA l0ssless 5.1 mix. The sound is rather impressive in both films which I didn’t expect especially from the first Fox and the Hound. While the first film is very front heavy experience, Fox and the Hound 2  takes advantage of the soundfield with the rears actually getting a good workout with the soundtrack and effects. Dialogue is well placed through the center channel with voices being so ever clear.
Print Quality: 9/10

The Fox and the Hound has some of the Disney studio’s best artwork and animal characters. It balances out action, comedy, adventure and romance. It’s one of Disney’s rarer films, along with Song of the South, and should be viewed by anyone who loves the idea of a strong friendship.
Overall Rating: 7/10