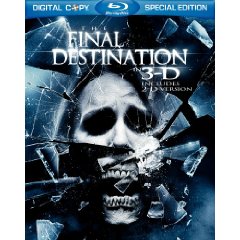 Installment #4 in the premonition-laden Final Destination series comes on like a poker-faced send-up of the previous episodes, featuring a collection of hilariously over-the-top deaths and the usual array of Rube Goldberg set-ups–except this time the chain reactions rarely result in mayhem. Fate, it seems, is more random than that. We open at a racetrack, where vapid teen Bobby Campo has a vision of slaughter involving cars crashing and bleachers crumbling. When he hustles girlfriend Shantal VanSanten and their friends out of the grandstands before the real conflagration, it doesn’t take long to figure out that their time is going to come, and soon. (Which they would have known if they’d watched the first three Final Destination movies.) From there, it’s just waiting around for the killings, which this time utilize a car wash, a beauty parlor, and a tow truck run amok. Perhaps the gruesomeness of the deaths this time is explained by the cheapjack production (gotta grab ’em with something) and surely the many jabbing, jutting implements are there because the film was released to some theaters in 3-D. As for the death that occurs in a swimming-pool drain, it seems somebody read Chuck Palahniuk’s notorious story “Guts,” or at least had an ear for urban legends. The bland characters and tin-ear dialogue don’t help anything, even if the climactic sequence in a movie theater showing a 3-D film suggests a lurking sense of self-awareness. Moral: there may be three dimensions, but there’s only one destination.

At heart, all horror movies operate on the human response to mortality. Your average horror fan gets a thrill from the films because they are a sort of spice for life, they are the seasoning that makes the mundane parts of life all the more richer. Watch a bunch of people get sliced and diced by a monster or madman, and that adrenaline rush makes you feel as if, on some level, you yourself have cheated death. For awhile or more, it’s nice to be alive.

The “The Final Destination” films utilize the same premise, but instead of creating a defeatable villain, it makes the very act of dying the villain. Watching the movies, it’s very much like they decided that the force of Death, after a millenia of ending lives, has grown bored and has decided to put some spice into his job. In all of the movies, Death awards a young soul with a premonition of a huge catastrophe, and when that soul saves him/herself (along with a handful of others), Death gleefully sets up cat-and-mouse games with the survivors and watches as they scream and skitter. The question is never Will They Die? It is How Long Can They Hold Out?

That being said, I realize I haven’t said much about the 3-D process. I’ll say this much: It achieves what it set out to achieve. This is especially true of the opening and closing credit sequences, which feature animated x-ray images of people being killed in all sorts of nasty ways. Bones break. Teeth shatter and fly right at you. Skullcaps get sliced off. A drill bit seems to be aimed right at our heads. Does this sound appealing to you? If so, fine. If not, be aware that it’s probably the best the movie has to offer in the way of cool graphic imagery. Not even a carwash mishap or a movie theater explosion, both effective, have the same power and punch. And shots of Death manipulating objects to cause a disaster stopped being clever a long time ago.

Why are they making more of these movies? Didn’t the first one say everything that needed to be said? The insinuation is that “The Final Destination” is the last in the series, but I’ve repeatedly observed that the word “final” is meaningless when it comes to a popular horror franchise (“Friday the 13th” used it twice, and they were proven wrong both times). If the 3-D process is the only way left to make this idea fresh and exciting, if the purpose is no longer to be scary but to film a series of gory death scenes, if the actors are given roles with no depth, then it’s probably time to let go and move on to something else. Even Death needs a break from time to time.
Movie Quality: 8/10

The print is presented in 1080p/AVC MPEG-4 with a 2.40:1 aspect ratio.Colors are deep and well saturated throughout the entire presentation. Blacks are strong and almost inky at times. Nowhere did the image ever appear soft with such strong colors and black levels. Flesh tones were also natural. There is some subtle grain in a few scenes, but never a distraction. Blue tints look very strong as this color is used in several scenes, especially when the teens are sitting in the back of the van.
Video Quality: 9.5/10

The audio is presented in DTS-HD MA lossless 5.1 mix. This is a demo worthy mix that could easily sell those on the fence about the format. The soundfield is immersive at all times no matter if it is the special effects or dialogue. I was literally amazed with the amount of panning from each speaker in the rears. It sounded as if there were all kinds of action going on in the room. Bass was punchy as it shows with the amount of effects and explosions. Dialogue is also well placed in the center channel sounding crisp and clear. The best part of this all around aggressive soundtrack is that it is well balanced between the dialogue and sound effects.
Audio Quality: 10/10

‘The Final Destination 3D’ is a decent sequel that falls in line with the second and third films in the series. I do hope that this is the end of ‘The Final Destination’ series as I feel they have reached at just about every possible way of killing someone. The video and audio are demo worthy which will make fans of the Blu-ray format very happy and the version to own. I would recommend a rental first as this series does feel a lot like been there done that.
Overall Rating: 8/10