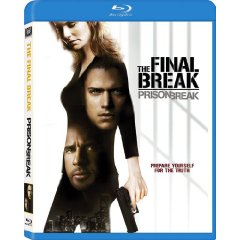 The federal government can’t touch Michael Scofield, so they’re going after the woman he loves. When Sara is arrested for murder, only Michael can rescue her — and their unborn child — from an impenetrable women’s prison. With a price on Sara’s head and time running out, Michael must rely on his deadliest enemies to help attempt the most daring breakout ever.

The previously not shown two hours of the TV show Prison Break were packaged as this film. It’s a final hurray for the 4-season long show that started out strong and ran into “creative difficulties” at the end. These two hours fill in a few gaps that the series finale glanced over. This is definitely a movie for the die-hard fans, as there are character reveals and returning characters as well as the regulars acting in a predictable manner. This is not a stand-alone film.

Anyone who has not been a fan of the show, even anyone who has skipped most of season 4, will not really understand what is going on in the storyline and why the leads are worth rooting for. My recommendation is to watch the series finale up to the “Four Years Later” sequence, then seeing Prison Break: The Final Break, then returning to the season finale and watching the last few minutes (the montage at the end). The storyline is thus complete and makes more sense as well as provides more canon and insight into the lives and storyline of each characters.

The Final Break gave me the closure that was missing from the series finale albeit a one time excellent television series was dragged through the mud. The first two seasons were really good, and then each season after that things started to fall apart with the direction of the this series. I stuck out all the way to the end and I was not left disappointed with the way the show was wrapped up and this added the icing on the cake.
Movie Quality: 9/10

The print is presented in 1080p/AVC MPEG-4 with a 1.78:1 aspect ratio. This probably one of the more beautiful looking television shows that I have seen on Blu-ray. The image quality is pretty good with colors being rather strong throughout. Blacks are rather solid and deep. Fleshtones look very natural with the proper lighting used with inside and outdoor scenes. I found the details to be excellent. Fans of the series will not be disappointed.
Video Quality: 9/10

The audio is presented with a DTS HD Master Audio 5.1 mix. For a television series, this has to be one of the better sounding shows that I have heard to date on the high definition format. There is a mixture of dialogue and action sequences in this show and boy does the action sequences not miss a beat. Even the dialog is mixed well for that perfect balance.
Audio Quality: 9/10

There are only 2 deleted scenes available which is a shame that the special features were so limited for this final hurrah to such a great television series.
Special Features: 2/10

I am happy that there was closure to one of my all-time favorite television series with the finale throwing a curveball our way. The video and audio are excellent on Blu-ray making me wish that seasons two and four would be released in high definition. This is a final hurrah for the fans.
Overall Rating: 9/10