Posted in DVD Reviews by George Theofanopoulos on 06 February 2009 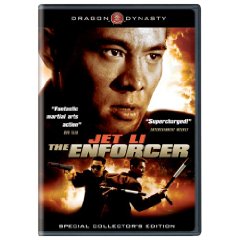 Jet Li stars in this kung-fu vehicle directed by Corey Yuen Kwai. Though a committed father and husband, Kung (Li) is a mainland undercover cop assigned to a case so sensitive that he dare not tell what he does to those he loves the most. Ordered to infiltrate the crime syndicate run by the psychotic Po Kwong (Yu Rongguang), Kung befriends Po’s associate Darkie (Blackie Ko Shou-liang) and helps him escape from jail.

In gratitude, Darkie smuggles Kung in Hong Kong and introduces him to Po. During an exchange between the crime lord and a second shady customer who is hawking liquid explosives, a shootout ensues. Kung takes policewoman Fong Yat-wah (Anita Mui Yim-fong) hostage and flees the scene. After he saves her from falling to her death, Fong suspects that Kung is more than the average thug. She journeys to China to investigate the matter, and learns that indeed he is an honest cop. Unfortunately, some of Po’s associates also go to China and learn the same thing.

I saw this movie as “My Father is a Hero” and I loved it the first time. The interaction between Jet Li and the kid (also in New Legend of Shaolin) is one of the cornerstones of the appeal. Swinging the kid around so he can bash people in the heads is cool. Both Jet Li and the kid (I know he’s got a real name, but I forgot it) are amazingly talented martial artists and they have a style unsurpassed by other Hong Kong actors.

Unfortunately I saw this movie a second time and all the scenes that I was overlooking while waiting for the action, I just couldn’t overlook them. There is the mother who spends half the movie dying (but you don’t care), Anita Mui’s lackluster performance and a lot of irritating garbage to get through before you get to the final fight scene. There’s also that Hong Kong sleek vs. China Dowdy dichotomy that obsessed Hong Kong filmmakers in the decade before unification.
Movie Content: 3.5/5

So I can recommend watching this movie once, but if you watch it a second time, you’ll be disappointed. Not many Hong Kong movies hold up on a second viewing but there are Jet Li ones that do including Fist of Legend, Swordsman II and The Legend of Fong Sai Yuk.
Overall Rating: 3.5/5

“Dragon Dynasty strives to provide fans with only the highest quality DVD releases, including restored video and audio and extensive never-before-seen bonus features created exclusively for the label.

Though no usable version of the original Cantonese-language track was available in time for this release, every effort was made to bring together the best elements in the world in creating the greatest version of The Enforcer ever experienced on DVD in the U.S.”