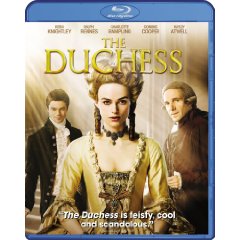 Keira Knightly is making a career the last few years of starring in films that cover English period. In ‘The Duchess’ she battles over many different emotions as she faces many internal issues over the years. The Duchess as we learn is about a very complex woman that has inner struggles that make her the woman that she would become. The film was rather successful at the theaters as it brought in a total worldwide gross of $32 million dollars.

In 1773 Georgiana (Keira Knightly) becomes very ecstatic when she hears that her mother (Charlotte Rampling) has set her up to marry Duke of Devonshire (Ralph Fiennes). The problem is that the Duke has no care or love for Georgiana. He only cares to have sex with her so they can conceive children. He wants nothing more than an heir, so Georgiana is going to become a part of his plan than a loving wife. To his dismay, she ends up having a girl which triggers him to become very angry. The two begin to have marital issues, but somehow Georgiana places those issues in the background.

Georgiana becomes the fashion queen in England making her even more popular. At this point you almost forget that she is the Duchess. While success is there, her heart is rather empty and there is a need for love. Georgiana begins to look in other places for love that she would eventually find. Georgiana can be looked at in the wrong light, but she just always wanted to fit in and feel loved. This goes back to the beginning of the film when she has doubts about someone loving her. This brings up the notions of a low self esteem.

The Duke than makes it his goal to make Georgiana very miserable. He goes on to sleep with her best friend Bess (Hayley Atwell). Once she finds out that he had an affair, she wants nothing to do with Bess and that she must be immediately sent away. The Duke, the jerk that he is, decides that Bess will live with them. This sets up even more tension in the household between the three. This enrages her even more that it makes her steer towards a politician Charles Grey (Dominic Cooper. This begins a whirlwind of more inner struggle for Georgiana.

Keira Knightly does an excellent job playing the ‘The Duchess’. She has done well in her roles with English period dramas. Both Ralph Fiennes and Keira Knightly play off each other very well. Between his monster like performance and her innocent persona, it is a clash between good and evil in a marriage.
Movie Content: 4/5 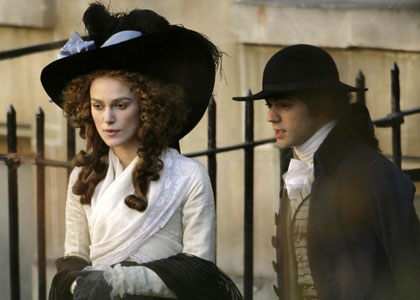 The print is presented in 1080p/ AVC MPEG-4 with a 2.35:1 aspect ratio. Colors are vibrant and vivid, providing for a bright colored image. Flesh tones are accurate. Blacks are deep, yet there are a few instances where they look a bit soft. Details are prevalent throughout the entire print. I was very impressed with the set pieces used and the clothes for the time period. In high definition this is a very stunning print bringing the time piece to life.
Video Quality: 4.5/5

The audio is presented in Dolby TrueHD 5.1 mix. This is a dialogue driven film, so do not expect the soundfield to have a lot of action. Dialogue is clear throughout the presentation never having to raise the volume. The score by Rachel Portman comes into play giving the soundfield a bit of engagement.
Audio Quality: 4/5

‘The Duchess’ is another great English period film that Keira Knightly and Ralph Fiennes do an excellent job providing real life and emotion in their performances. The Blu-ray version of the film provides excellent video and audio that is close to demo quality on the video presentation. If you enjoy films during English set periods, this is a film worth adding to your collection.
Overall Rating: 4/5 (Purchase)