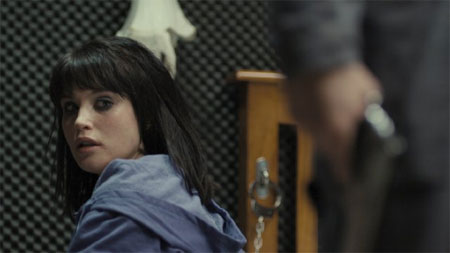 The British thriller The Disappearance of Alice Creed is a taut exercise in psychological manipulation, driven by three forceful performances, most notably actress Gemma Arteton (Clash of the Titans) as the titular abductee. On the surface, Disappearance seems to be cut from familiar cloth: ex-cons Eddie Marsan (Sherlock Holmes) and Martin Compston plot out and then execute the kidnapping of Arteton, the daughter of a wealthy businessman, for a sizable ransom. But as the minutes tick by in their dreary holding cell of a flat, relationships develop in unexpected ways, as do shifts in allegiances and motivations. To reveal these seismic changes would be to unleash spoilers of epic proportions, but suffice it to say that few will have expected the film’s frenzied conclusion. Directed by first-timer J Blakeson with an eye towards pacing and atmosphere, The Disappearance of Alice Creed should please fans of adult suspense pictures with its smart scripting (by Blakeson) and fearless turns by its cast, especially Arteton in a role that requires her to play, by turns, victim and perpetrator; the DVD includes commentary by Blakeson, who discusses his influences (among them, Alien, interestingly enough), as well as two extended scenes with commentary and a collection of comic outtakes. A five-minute storyboard comparison, which shows preproduction sketches of the opening alongside the finished product, and the stateside trailer round out the extras. 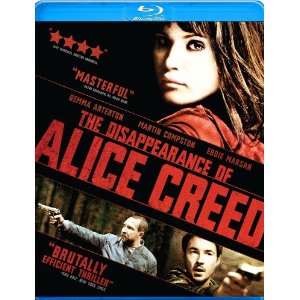 “Alice Creed” has something up it’s sleeve, again and again. Where most “woman-as-victim” movies are predictably cruel, “Creed” veers and turns into a dark, psychological thriller that ups the ante with an unexpected twist nearly every 15 minutes.

With a cast of three, one might think the story would bore, but each of these characters has a surprise – not only from within but waiting for them as well. Each of the actors makes their part real and densely layered. Yes, Alice is the victim, but Arterton gives her and edge with amazing strength and perseverance. She’s totally believable. The boss of the kidnapping pair (Eddie Marsan is coldly spot on, his work in Masterpiece Theatre’s “Little Nell” as Pancks was a great warm up for this part) is seemingly heartless but later redeems himself. His younger and weaker partner is a study of dichotomies and inner turmoil. All three are easily more than enough to fill the screen and make this movie worth watching.

The entire work is filmed with a claustrophobic feel, very private but also very bleak, with the colors tuned down and the shadows emphasized. There are few sets and locations and the story relies on spare dialogue to reveal itself. The entire first 15 minutes shows the kidnappers prepping for their crime without speaking until the meat of the story finally reveals itself: the kidnapping begins with the boss saying “OK”. And then the movie begins it’s descent into a act that deeply affects all three characters and anyone watching.

Some may say this film is an unnecessary addition to an over-abundance of film noir pieces, but for me it gets close to the top of the stack. Two things bothered me, however. The first is scriptwriters’ habitual negative portrayal of gay or bi characters. The 2nd is the odd way the director had the character Danny unnaturally keep his back to us when handcuffed to the bed in order to keep from showing frontal nudity, even though Arterton is shown full frontal several times. This Puritanically typical trait of filmmakers shows a bias that mar otherwise good productions.
Movie Content: 9/10

The print is presented in 1080p/MPEG-4 with a 2.35:1 aspect ratio. Colors are deep and well saturated throughout the entire presentation. Blacks are strong and almost inky at times. Nowhere did the image ever appear soft with such strong colors and black levels. Flesh tones were also natural. There is some subtle grain in a few scenes, but never a distraction. Blue tints look very strong as this color is used in several scenes. You will not be disappointed at all by the video quality.
Video Quality: 9/10

The audio mix is presented in DTS HD 5.1 Master Audio lossless track. This is an excellent mix that could easily sell those on the fence about the format. The soundfield is immersive at all times no matter if it is the special effects or dialogue. I was literally amazed with the amount of panning from each speaker in the rears. It sounded as if there were all kinds of action going on in the room. Bass was punchy as it shows with the amount of effects. Dialogue is also well placed in the center channel sounding crisp and clear.
Audio Quality: 9/10

Even so, the movie stuns with it’s level of visceral criminality. A kidnapping affects the criminal as much as the victim and this is the bare bones underlying theme of “Alice Creed”. Watch this film and be prepared for surprises.
Overall Rating: 8/10