Posted in DVD Reviews by George Theofanopoulos on 04 May 2010

Dazed, bloodied and speechless with trauma, Sarah Carter emerges alone from the Appalachian cave system where the events of The Descent took place. Local sheriff Redmond Vaines forces her back underground to help the rescue team which is desperately searching for her five missing girlfriends. As the team moves deeper into the caves, Sarah’s flashes of fractured memory intensify and she begins to realize the full horror of the would-be rescue mission. Only Sarah knows the terror which lurks in the shadows of the caves. But they are about to encounter a new tribe of crawlers – inbred, deformed and even more viciously feral than those Sarah faced before. 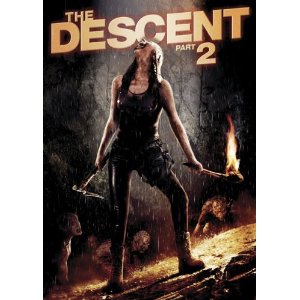 The Descent didn’t need a sequel. It was a pitch-perfect horror film, one of the best I’ve seen in the last decade or longer, that incorporated high amounts of tension, a desperate struggle, some amazing jump-out-of-your-skin scares, great characters that you actually cared about and just the right amount of gore. I loved that film. Its original UK ending was also such a great, sad and interesting way to close it out. But apparently, The Descent: Part 2 decides to forgo that horror classic ending and instead uses the American/”happy” ending. It’s interesting to note that the sequel is “Part 2” as opposed to simply The Descent 2. It indicates that it is an extension of the first film, as opposed to a sequel. As such, to discuss Part 2, I’ll have to talk about the first one. You’ve been warned.

The American ending of The Descent finds Sarah crazed and amnesiac with fear of her plight from the previous film, running to a rescue truck. During the time she and her team have been lost, the local sheriff has started a search party for Juno, who not only was left for dead by Sarah for her infidelity and a misunderstanding, but is also a senator’s daughter. Sarah is taken to a hospital where said sheriff, Sheriff Vaines, decides that not only is Sarah a suspect in the missing spelunkers (for her shirt was covered in blood) but that she must go back underground to help locate them. Never mind the fact that this probably wouldn’t happen in real life because 1) she’s obviously hurt 2) mentally unstable and 3) uh…she has no memory, remember? Also forgetting the fact that it seems awfully coincidental that she happens to not remember that the cave system is swarming with cannibalistic creatures, we now have a reason for more bloodshed.

That’s pretty much the movie in a nutshell. Part of the reason the first film was so powerful and shocking was because director Neil Marshall used two different types of terror and helped add some twists to his film. The first part had a claustrophobic, fearful feeling that maybe you were going to be watching Alive…Underground. But once that type of horror was getting a little stale, he does a complete 180 and now they are fending for their lives against some unknown group of carnivorous cave dwellers. It was expertly filmed and paced to perfection.

Part 2 tries to ape that same style. It has the same opening credit sequence, has a similar overall motif and even the same music. In a lot of ways feels like a retread…except nowhere near as good. Again you have a group of people who have no clue they are being hunted by monsters. Again you have a small cave-in that causes the group to be splintered, etc. etc. The only problem is that you, the viewer, is in on the twists this time and it really just gives the entire film a “been there, done that” feel. To counter-balance this, Part 2 almost turns into a gross-out “comedy,” where Jon Harris (the director) finds more and more ways to drench his protagonists with blood and finds various ways to make sure that blood pours into someone’s mouth. I think this happened at least two or three times. It was almost comedic.

I just hope there aren’t anymore in The Descent series. The first is the best out of the two. The second is only for people who loved the original movie and wanted more, such as myself. The ending of this movie (awful as it is) sets up the idea for a third sequel, but I hope they don’t go through with it. Not if the director isn’t going to use good camera work, colorful lenses and better ideas. Without giving away the whole ending on this site, it kinda’ reminded me of how some of the ‘Wrong Turn’ movies ended. It was a rather unnecessary move if you ask me. They should have thought of something a little cooler than the one they went with. You have to see it to know what I mean.
Overall Rating: 8/10