Posted in DVD Reviews by George Theofanopoulos on 22 March 2014 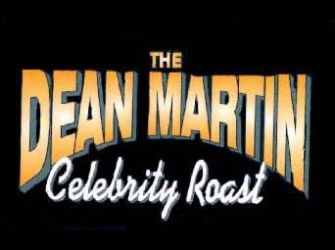 The Dean Martin Celebrity Roasts were a fixture on NBC s Thursday night lineup from 1973 to 1984. In those 11 years, Dean and his panel of pals successfully ridiculed, embarrassed and made fun of legendary stars like Frank Sinatra, Lucille Ball, Sammy Davis Jr. and Dean Martin himself, to name a few — and America loved it! Over the past 20 years the roast format has really become a kind of American folklore: set at a banquet table, in which the guest of honor was showered with insults from other celebrities. The Dean Martin Celebrity Roasts: Fully Roasted 6-DVD set highlights Dean Martin as insults are being flung by the many guest stars who parade in front of the pulpit to lambaste the day’s biggest stars of Hollywood, Sports, TV and Politics! 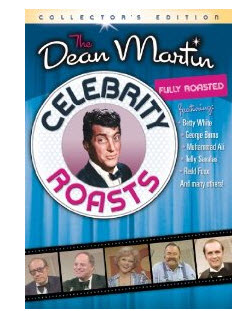 This box set collects a dozen of the best Dean Martin roast shows, skewering. For my money, the earliest episodes are the best, and in many ways the most revealing. The feature debuted at the height of the Watergate scandals, as well as the sunset years of the Vietnam War, and as always Martin’s clique was a bastion of conservatism and mainstream cultural values. Still, at this point the tides had turned and while the war was largely off the table, there were a number of jokes about Republicans going to jail, and Ronald Reagan was clearly using the show as part of his planned bid to run for President in ’76.

Perhaps more revealing were the sexual and racial politics running under the surface — this was the stuff that flew over my head when I was a kid, but which is shocking looking back forty years later, as an adult. There were plenty of sexist jokes, some funny, like Phyllis Diller’s “killer” act and some appalling, like actress Louisa Moritz’s dumb blonde routine. What will make some jaws drop, though, are the racist jokes aimed at or delivered by the African-American panelists, who were uniformly expected to play a “black” role, making jokes about urban crime or delivering watered-down “angry black man” one-liners. Perhaps what’s most surprising is the acceptance by performers like Redd Foxx, Flip Wilson and Nipsey Russell of the show biz status quo — the white guys made the big money and controlled all the venues, so they played the role that was expected of them. During the 1973 Johnny Carson roast, singer Dionne Warwick is clearly taken aback when Martin introduces her by saying that she’s become so successful that she now owns a big plantation in the South where she pays “white people” to pick “colored cotton,” but after a quick double-take, she sucks it up and delivers her bit. Later, though, when Carson zaps Redd Foxx (who was sitting next to her) by saying that “his people” invented the idea of roasting human beings, Warwick is flabbergasted and can only stare down at the tabletop, stunned by what she’s heard. She’s not alone, at least not anymore.

Sadly, most of the roast participants, including its namesake, are no longer with us. The roasts’ humor is sometimes thin, often racist and sexist and, by today’s standards, forbidden. But these DVDs remain time capsules of 20th century American humor of a certain era which makes for must-see video (at least once) even in the less innocent 21st century.
Overall Rating: 8/10