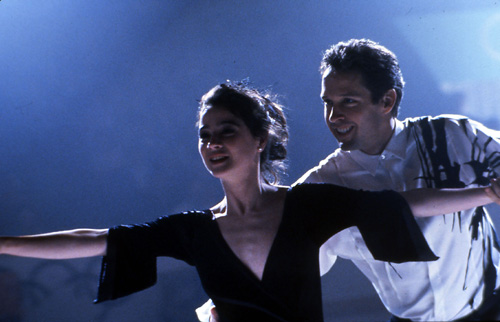 As far as ice-skating movies go (or those that prominently feature the cold-bladed sport), this romantic movie is one of the best, thanks to utterly charming performances by underrated actors D.B. Sweeney and Moira Kelly. The couple play, respectively, a washed-up hockey player and a prima-donna skater who end up in doubles figure skating together at the Winter Olympics. Of course, the mismatched pair fall in love. In between, there’s a lot of verbal sparring, talk of toe picks, and surprisingly skillful directing by Paul Michael Glaser (Kazaam, The Air Up There). Direction here is critical–unlike in Flashdance, where the dancing was done in the shadows, face and feet obviously shot separately–and credibly highlights the actors and their professional stand-ins. This is such a fun, sweet story that the facts the film takes liberties with–including the alacrity with which a hockey player takes to Olympic-level figure skating–are easily forgivable.

This is a charming, if somewhat predictable, movie. With wonderful performances by the sexy D.B. Sweeney and the lovely Moira Kelly, two very underrated actors, this movie will keep the viewer entertained. The story revolves around two athletes. One is a top notch, Olympic level, ice hockey player, who sees his potential professional career go down the tubes, when he is injured during the Olympics. The other is the female half of a pairs figure skating team, who choked during the Olympics, ending their quest for the gold.

Both are not doing well after their own personal waterloo. He is now playing with amatuer teams, as his injury precludes him from going pro. She, a total prima donna, is busy, going through one skating partner after another with no success. Her coach, knowing that the ex hockey player has a lot of skating talent, contacts him in hopes that maybe he will be the one that will be able to work with his temperamental Olympic hopeful. He agrees and goes to work on learning the niceties of figure skating. She goes to work on learning to get along with him. Together, they are working towards earning an Olympic Gold medal.

There are some delightfully funny and heartwarming scenes in this film. Probably the funniest is the toe pick scene. When you see the film, you will know what I mean. While there is some hockey and figure skating action in this film, it is really not a movie about either sport. It is essentially a romantic comedy that is delightfully directed by Paul Michael Glaser. All in all, it is a very enjoyable film and well worth watching.
Movie Quality: 8/10

The print is presented in 1080p/AVC MPEG-4 with a 1:85:1 aspect ratio. Colors are strong throughout looking great which I did not expect. Black levels are not that great which this print would have benefited from greatly. Clarity is decent with details being a huge improvement over the DVD release. There is some grain which is consistent. The one issue with this release is the dirt and white specs that are present.
Print Quality: 8/10

The audio is presented in a DTS-HD Master Audio 2.0 mix. This mix is good for being DTS-HD MA 2.0 providing good separation with the skating scenes. This film could have benefited from a 5.1 mix and just a shame that it wasn’t. Dialogue comes through the center channel very clear and crisp.
Print Quality: 7/10