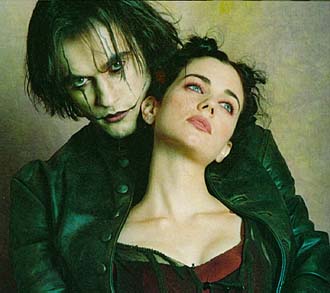 Because of his tragic death on the set of The Crow, we’ll never know if Brandon Lee would have turned one successful film into a popular series. But one look at this tepid sequel suggests that not even the charismatic Lee could have rescued The Crow movies from the burden of a lackluster screenplay. Based on the popular comic books by James O’Barr, this sequel finds Vincent Pérez as a man named Ashe, who is murdered along with his young son by a gang of drug-running thugs under the employ of slimy kingpin Judah Earl (Richard Brooks). Ashe is resurrected with the help of a tattoo artist named Sarah (Mia Kirschner), whereupon he begins a campaign of revenge against his killers. More a rehash than a sequel, the film repeats the grungy, dark look of urban decay from The Crow, but its combination of violence, heavy-handed symbolism, and tacky sentiment make this a film strictly for nihilistic teens. Then again, no movie in which veteran punkster Iggy Pop plays a sleazeball can be considered a total loss. 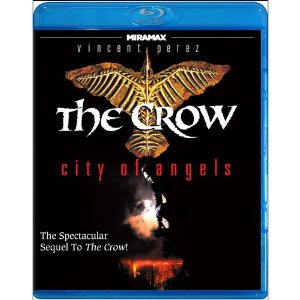 After he and his son, Danny, are brutally murdered, Ashe Corven is resurrected by the “mystical” crow in order to avenge the slayings. He is transformed into “The Crow” by Sarah, now all grown up and living in L.A. She paints his face to match that of her first Crow, Eric Draven, and sets Ashe on his path to avenge his son and himself and reunite with Danny in death.

I’m one of the many Crow fans who actually liked the second movie. I thought the visuals were amazing. The colors of the city popped when they needed to and faded into the background when they needed to. The soundtrack was a mish-mosh of artists but the styles of all of the artists blended perfectly with the style of the movie.

Vincent Perez was great as the grieving father. Ashe wasn’t supposed to be another Eric Draven, he is another character all by himself. Stop comparing him to Eric Draven and Brandon Lee!!!

Mia Kirshner was pretty good as an all grown up Sarah. Sarah had alot of crap happen to her, as we saw in the first movie. My only issue is that sometimes she has an “I’m so goth I’m dead” complex but that’s her style of acting (check out the L-word if you don’t believe me). If you read the comics it goes a little more into her character, not much, but enough.

This movie is an entirely different entity from the first movie. I love the first movie and hate that Brandon Lee will never know the acclaim he deserves for his last work, but don’t hate the second movie out of principle. Watch the movie as if it was the only Crow movie to ever be made and then read the comic and you’ll get a better understanding of the story as a whole as well as an appreciation for the hard job it was to create a sequel to a movie with the legacy left by the original. Plus a few plot holes and subplots may get cleared up, like that whole Ashe loves Sarah thing.
Movie Quality: 7/10

The print is presented in 1080i/AVC MPEG-4 with a 1:78:1 aspect ratio. This is my third Echo Bridge review this week and so far this company is not doing so well with their first wave of Miramax releases to Blu-ray. After viewing Halloween H20 and From Dusk Till Dawn Echo Bridge releases I have learned one thing with this wave of releases, inconsistency. I experienced the same issue with From Dusk Till Dawn where the image looked great in one scene and then lost all details and clarity in the next. This happens quite a bit with this film where one moment the image has some excellent details and then the next scene looks like a DVD. Colors are quite decent, but not eye popping and a lot of that has to also do with the material considering how dark this film is. Black levels are good, but not great like I would have hoped. This is the kind of film where black levels could excel with a proper restoration. I just was not impressed with this transfer at all and what makes it worse is that this is a 1080i transfer which is something that I would find on broadcast cable. At this point, I feel like Echo Bridge has taken films that were meant to air on cable television and placed them on Blu-ray to make a dollar.
Print Quality: 4.5/10

The audio is presented in a DTS-HD MA lossless 2.0 mix. Yet another audio mix from Echo Bridge at DTS-HD MA 2.0 which is a film that would have really shined using a 5.1 mix. Like the first Crow film, we have the return of the metal/alternative soundtrack that would have sounded fantastic filling the entire soundfield. Even worse is when there is all kinds of balls out action going on the screen and you turn around hoping you can hear some panning or whizzing bullets behind your head and then realize with this mix your not going to get that. With a 2.0 mix you get an aggressive front experience and that is no different here. Dialogue is clean through the center channel with no issues at all.
Print Quality: 5/10

The Crow City of Angels tries to hard to be like the original Crow. The similarities make it feel more like a remake than a sequel. This is yet another video and audio presentation that Echo Bridge has just rushed out to get to the market to make money for a title that still hasn’t released in high definition. It comes down to not having a full 1080p transfer, a DTS-HD MA 2.0 mix instead of a 5.1, and no special features at all. I would just take caution with picking this up on Blu-ray, it is one deceiving package for a company looking to make money off of Miramax’s library.
Overall Rating: 4/10