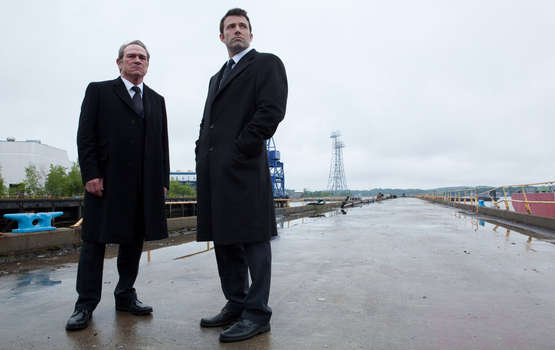 In creating ER, writer-director John Wells launched the career of George Clooney, who starred in Up in the Air, which could serve as a prequel to The Company Men. When times get tough, Boston shipping conglomerate GTX sheds employees–while CEO James Salinger (Craig T. Nelson) retains his $22 million salary. HR director Sally Wilcox (Maria Bello), the companion of married cofounder Gene McClary (Tommy Lee Jones, the standout in a strong cast), fires sales manager Bobby Walker (Ben Affleck) during the first round of cuts. Though Bobby’s wife, Maggie (Mad Men’s Rosemarie DeWitt), doesn’t think any less of him, her husband feels like a failure. She returns to work, while Bobby enters a job placement program, but he only meets with rejection. During the next round, Sally fires Gene and Phil (Chris Cooper). While the former has a financial cushion, Phil’s situation mirrors Bobby’s, except he’s 23 years older, making the situation more difficult. When Maggie’s brother, Jack (Kevin Costner), offers Bobby a construction job, he declines–until fate forces his hand. He soon comes to find that Salinger’s way of running a business isn’t the only way. His education reflects the filmmaker’s concern about men who define themselves by their jobs, but an underlying message involves overly confident execs who fail to save for a rainy day. The Company Men charts the path of those who fail to adapt to a changing landscape, and those who do, making for a film that’s far more sobering than depressing. 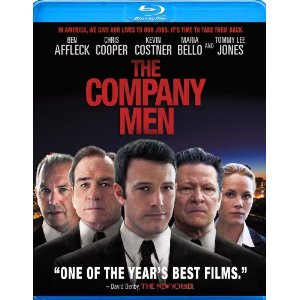 “The Company Men” is a sober telling of life within a modern company. Men come to be defined by their jobs and when the job is taken away from them, they are lost. Their world as they understand it simply collapses.

At a high level, “The Company Men” covers the lives of several executives of the ship building division of GTX Corporation, an American conglomerate. Profitability and growth seems to be eluding the division and the only response of management is downsizing and, when this fails, more downsizing. Each man is thrown into a whirlpool. Their lives of debt and over-consumption come to a screeching halt. If there is one message from this film it is that too many people assume that things won’t change. Too little attention is paid to saving for a rainy day. Consumption is king.

There are excellent performances by Tommy Lee Jones and Ben Affleck. Both end up being “let go” and both struggle with the consequences. However, eventually, reality must be faced. This is not an easy row to hoe. In the case of Ben Affleck’s character, his life style is forced to undergo big changes. His house is sold, his family moves back to living with his parents, his wife gets a part time job and he takes a job of manual labour from his brother in law.

Without spoiling the plot, there is a somewhat happier ending. However, in the meantime, the film gives an excellent portrayal of so much of modern corporate life. It’s a dog eat dog world out there. Just remember that change can be forced on anyone.
Movie Quality: 9/10

The print is presented in 1080p/AVC MPEG-4 with a 1:85:1 aspect ratio. From the colors to the details, your jaw will drop if you look for some of the superb details. Colors are vibrant providing an excellent looking picture. Flesh tones are natural and accurate looking. Blacks look inky. Details are where this film shines the most with the camera even panning away in many scenes. Not once did I feel like I was at a loss for details making this a very strong presentation.
Print Quality: 9/10

The audio is presented in a Dolby TrueHD 5.1 mix. ‘The Company of Men’ is a more dialogue driven film with excellent audio for the premise of the film. There are no action sequences, so don’t come in expecting a bombastic mix. Dialogue is very clean and crisp through the center channel. We have more of a front heavy experience with the mix as dialogue also tends to pan between the front speakers. When the rears get are in use, you hear a few sound effects and the score.
Print Quality: 9/10

“The Company Men” is an Oscar worthy film in many ways. All of the performances are very good and each of the actors is very Oscar-friendly. The studio apparently agrees because they released the film for a one-week limited engagement in December. All films must play for at least a week before December 31 in order to qualify for the Academy Awards. I think they expected at least a couple of nominations to help provide them with a marketing tool when the film was ultimately released ‘wide’ in January.
Overall Rating: 8/10