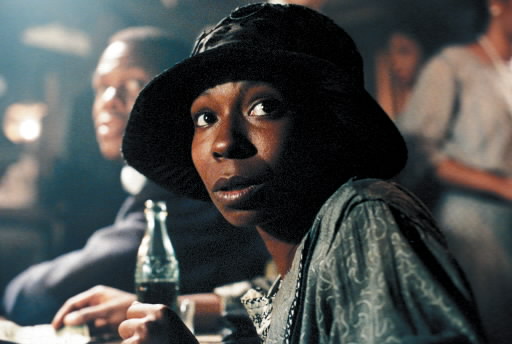 Steven Spielberg, proving he’s one of the few modern filmmakers who has the visual fluency to be capable of making a great silent film, took a melodramatic, D.W. Griffith-inspired approach to filming Alice Walker’s novel. His tactics made the film controversial, but also a popular hit. You can argue with the appropriateness of Spielberg’s decision, but his astonishing facility with images is undeniable–from the exhilarating and eye-popping opening shots of children playing in paradisiacal purple fields to the way he conveys the brutality of a rape by showing hanging leather belts banging against the head of the shaking bed. In a way it’s a shame that Whoopi Goldberg, a stage monologist who made her screen debut in this movie, went on to become so famous, because it was, in part, her unfamiliarity that made her understated performance as Celie so effective. (This may be the first and last time that the adjective understated can be applied to Goldberg.) Nominated for 11 Academy Awards, including best picture and actress (supporting players Oprah Winfrey and Margaret Avery were also nominated), it was quite a scandal–and a crushing blow to Spielberg–when it won none. 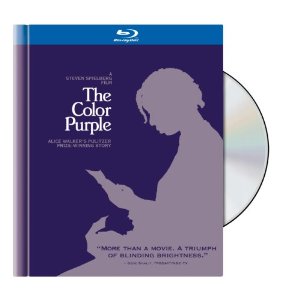 One of those movies that touches a person differently with each viewing, `The Color Purple’ may be a perfect film. It’s hard to take, sometimes overly dramatic (this may be uplifting and inspiring in the end, but getting there is a rough journey) but Steven Spielberg almost takes a Ron Howard approach to his filmmaking and creates a film that is dramatic yet heartwarming, with enough elements of purity that make the heavy-handed delivery seem as smooth as butter. Now I have not read Alice Walker’s novel, but I really want to now, so I can’t say if the film is as faithful as it should have been; but judging the film on its own merit there is no fault I can find, no fault at all.

The film tells the tragic story of Celie Johnson, a young woman abused by her father (birthing him two children) and sold to an older man who wants a woman to help him around the house (he has a slew of children and no wife). Celie takes the place of her younger sister, whom her father is not done abusing, Celie is sold into a life of torment and abuse at the hands of the unhappy Albert (or Mister). The film spans over forty years as Celie grows up reclusive and bitter only to have her spirits and her eyes opened when the boisterous and soulful Shug Avery comes into her life. Shug, one time lover to Albert, has some troubles of her own, but her way of dealing with them far outshine the way Celie has dealt with hers, and she helps Celie to come into her own and take back the life she should have had to begin with.

This is such a beautifully constructed story of oppression, not just by the hands of white men as is so often depicted, but `The Color Purple’ paints a disturbing portrait of abuse and oppression within one’s own family. Celie is oppressed by her father and then Albert. Albert is oppressed by his own father and his feelings for Shug. Shug is oppressed by the disapproval of her parents and her feelings for Albert and even Celie. The young and defiant Sofia is oppressed by her own actions, which result in her oppression at the hands of those around her, from her husband to her eventual masters. There is a tragic circle of abuse and control that is only broken when these individuals start to think and act for themselves, segregating themselves from the hands of their oppressors and becoming their own person.

This film is aiding by some of the most moving and effective performances I’ve seen committed to film. Danny Glover is emotionally scaring as Albert, a man confused and embittered by his own conflictions. Adolph Caesar is menacing as Albert’s domineering father, and his character helps us to understand Albert, a man who is very hard to understand on his own. Margaret Avery and Oprah Winfrey (both of whom were Oscar nominated) give amazing performances. Oprah is at one moment in-you-face with her abrasive attitude, the next minute concealed and broken. These two variations of character help her build this woman from the ground up. Margaret Avery is beyond fantastic as Shug. The way she effortlessly wraps herself around Celie and dominates her thinking and actions is heart-reaching.
Movie Content: 10/10

The print is presented in 1080p/MPEG-4 with a 1.77:1 aspect ratio. Colors are deep and well saturated throughout the entire presentation. Blacks are strong and almost inky at times. Nowhere did the image ever appear soft with such strong colors and black levels. Flesh tones were also natural. There is some subtle grain in a few scenes, but never a distraction. Blue tints look very strong as this color is used in several scenes. You will not be disappointed at all by the video quality.
Video Quality: 9/10

The audio mix is presented in DTS HD 5.1 Master Audio lossless track. Since the movie was originally a 2-channel stereo release, the lossless DTS-HD Master Audio soundtrack is mostly front-channel. There is very little for the surrounds to do, and one has to purposely get up close and personal with your surround speakers to hear anything at all through most of the movie. While scenes like those in the juke joint could have benefited from some ambience, this movie is first and foremost a story told by the main character, and every part of that story was understandable. Quincy Jones’ music also came through very well, and fairly numerous musical numbers are very enjoyable to listen to.
Audio Quality: 9/10

In the end I highly recommend this movie to any and everyone. This is a truly emotional film that connects with the audience on a deep and personal level. This is not a film about racism. This is a film about oppression, and each and every one of us has been oppressed at one point in our lives. We have not all been oppressed to this extent, but we can all gain strength from Celie’s story and can all appreciate her struggle and eventual triumph.
Overall Rating: 9/10