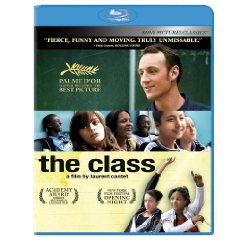 Everyone has memories of high school. Some are fond, some are traumatic, but all are real. Most of us can remember certain students in specific classes taught by particular teachers and the individual reasons we remember them so vividly. At its heart, “The Class,” the new film from French director Laurent Cantet (who, a few years ago, directed the intriguing “Time Out”) can be called a similar kind of reflection, of sorts. A reflection of its director, perhaps, but, moreso, that of its star François Bégaudeau who wrote its screenplay, basing it on his own book, which, in turn, is based on his real experiences as a school teacher guiding students similar to the ones who give so much life to this movie.

The story spans the course of a school year and takes place, if not strictly within Marin’s classroom, then entirely within the confines of the school grounds. As the months pass, the film seems to expand as those spaces gradually revealed to the audience: A school courtyard where students mingle, play and battle. A lounge where teachers meet and gripe about their pay, working conditions and the cost of the basic staples, like coffee. A room where teachers discuss school issues, joined by a pair of bored represntatives from the student council. Another room as the focus of parent-teacher conferences.

But the main setting, of course, remains the classroom of the teacher and his students, where Marin’s first assignment is for the students to write and recite a brief story about themselves, a project that, by the end of the film, has traveled a full, enlightening, poignant circle.

By the end of the film (and school year) there is a sense of weary, highly circumscribed accomplishment. Some students have developed learning unexpectedly. One girl, whom Marin had unwisely compared to a ‘skank’ earlier in the year admits she has read Plato’s Republic. But some students are still as clueless as they were at the start and feel they have learned nothing.

One of the best achievements of “The Class” is making us feel like we know the characters, and this is despite the fact that personal details are mostly kept hidden. We know, for example, that Marin is approachable as a human being, and he gets along just fine with the rest of the faculty, many of who are just as frustrated by their students as he is. But when it comes to being a mentor, something is seriously lacking; he can “teach” in the strictest sense of the word, but that doesn’t mean his students are actually learning anything.
Movie Quality: 9/10

The print is presented in 1080p/AVC MPEG-4 with a 2.35:1 aspect ratio. While the film is not a documentary, it does a great job giving that perception with the way it was filmed. This is a very soft looking film and a lot of it has to do with the setting in the classroom. There is a lot of natural lighting and the lighting  in the classroom that help give the film this look. There were a few print issues which resulted in artifacts appearing on the print throughout. On the flipside of things, I found the image to have some very good details. Fleshtones were accurate looking. For the type of film that this is, you will not be disappointed.
Video Quality: 8/10

The audio is presented in Dolby TrueHD 3.0 mix. I have never seen a film released on Blu-ray with a TrueHD 3.0 track and in French at that. Not that there is anything wrong with that, but a first for me as a reviewer. This is a film that is front and heavy throughout the entire film. Do not expect going in to get a dynamic or thunderous audio mix. This is a film that is dialogue driven and one that you will want to pay attention to.
Audio Quality: 8.5/10

‘The Class’ is a great film. It portrays a dedicated and talented teacher trying to engage an unruly group of diverse kids in learning. This is a very highly recommended film as it does touch your heart by film’s end. On Blu-ray the video and audio aren’t the best I have seen on the format, but work well for this kind of film.
Overall Rating: 8.5/10