Posted in DVD Reviews by George Theofanopoulos on 28 November 2010 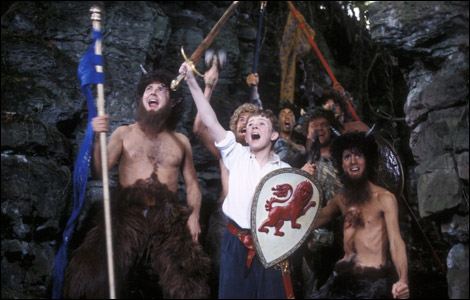 C.S. Lewis’s enchanting tale comes to life in this classic BBC adaptation from 1988. When young Second World War evacuee Lucy Pevensie hides in an old wardrobe during a game of hide and seek, she finds herself transported to the magical land of Narnia, locked in eternal winter by the evil White Witch. Her siblings do not believe her when she tells them of this strange new world, but they are soon in Narnia themselves, fighting alongside the noble lion Aslan to defeat the witch and her mighty army. This set includes the following complete stories from the book series: The Lion, The Witch and the Wardrobe; Prince Caspian; The Voyage of the Dawn Treader; The Silver Chair. 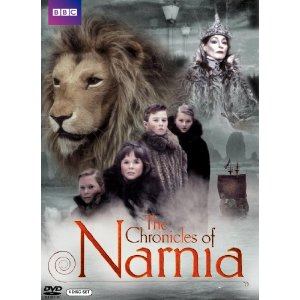 But it isn’t the first time that C.S. Lewis’ classic fantasies have been adapted — in the 1980s, the BBC made their own adaptation of the first four adventures of the Pevensies and their relatives. Some of the actors and special effects are frankly lacking, but mostly they are just solid storytelling.

“The Lion The Witch and the Wardrobe” introduces us to the Pevensie kids, four teenagers who are staying in the country during World War II. But during a game of hide-and-seek, Lucy (Sophie Wilcox) hides in a wardrobe — and finds that the back opens into a snowy forest land, populated by mythic creatures. It’s the land of Narnia, where the Pevensies are destined to become kings and queens — if they can destroy the evil White Witch (Barbara Kellerman), with the return of lion messiah Aslan (Ronald Pickup).

“Prince Caspian and the Voyage of the Dawn Treader” takes us forward a few years — and centuries in Narnia. Warlike humans have invaded Narnia and driven the talking animals, centaurs, dryads and others into hiding. But young Prince Caspian (Jean Marc Perret) believes in them, and joins them to defeat his usurping uncle Miraz. And the Pevensies are called from their world to help.

No sooner have Edmund (Jonathan R. Scott) and Lucy finished one adventure than other begins: while arguing with obnoxious cousin Eustace (David Thwaites), they are sucked into a painting and land beside the Narnian ship Dawn Treader. It also happens to be Caspian’s ship. The three kids accompany the young king through a sea of horrors, dragons, gold springs, slavers and magicians, right to the edge of the world…

The newly reformed Eustance takes center stage in “The Silver Chair.” At his chaotic school, he confides to a bullied classmate, Jill Pole (Camilla Power), about Narnia — and the two of them find themselves whisked there by Aslan. Aslan gives them a quest: Find the aged Caspian’s missing son Rilian (Richard Henders), who was seduced away by a malevolent witch. Eustace and Jill reluctantly go, and soon find themselves enmeshed in a plan to conquer all of Narnia.

The BBC has been known to make adaptations of countless books, so it’s not surprising that they tried to tackle the Chronicles of Narnia. The result is a mixed bag, with some bad acting and sketchy CGI, but still a satisfying fantasy series with some truly creepy, uplifting or just interesting.

Expect a very faithful adaptation — the BBC preserved virtually every character, most of the scenes, and all the Christian allegory of Lewis’ books. As a result, there are some truly chilling and magical scenes, like Eustace’s transformations and the owl conference. The settings are magnificent, especially the giant “Dawn Treader” and Caer Paravel.

Unfortunately, it does have its bad points, mostly in the tedium that is “Prince Caspian.” Some of the special effects are quite dated, including some early blue-screen effects that are almost convincing, but not quite. Costumes are very very Dungeons and Dragons, especially Miraz and his army — very Ye Olde Batmanne. And Aslan is played by a large and almost realistic puppet, except he looks like he has arthritis and large quantities of Botox.

The acting is a mixed bag — Scott and Thwaites give the best performances, especially since they both play obnoxious little pains who have to learn the error of their ways. And there are loads of entertaining supporting characters, like Big Mick (I swear that’s his name), both Caspians, Jeffrey Perry, and Warwick Davis (in owl and mouse costumes). The only sour notes are Wilcox and Kellerman; one whines, one cackles and screeches like a hammy banshee.

Those anticipating the return of Aslan and the Pevensies should check out the BBC adaptations — while they have some big flaws, they are still entertaining enough to enjoy.
Movie Quality: 8/10

The greatest flaw of this series, other than the production value, is the acting. Sophie Wilcox who plays Lucy is endlessly whining and Barbara Kellerman is so manic and over-the-top that I felt she would benefit from medication. However, both of these performers are redeemed by the many talented actors who surround them. The actors who portray the talking animals are particularly good and Ronald Pickup who voices Aslan makes the oversized stuffed animal of a puppet believable.
Overall Rating: 7/10