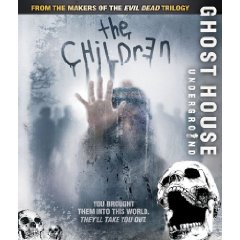 You brought them into the world. They will take you out. A family anticipates a Christmas filled with sledding, laughter and hot cocoa as they head to their vacation home in the secluded backcountry…The holiday cheer takes a fast turn for the worse after a mysterious flu-like virus sweeps through the kids. One by one the children become deadly. Amidst the suspicion, mayhem and murder, the parents fight for survival against their own twisted offspring.

I’ve seen both Paul Andrew Williams The Cottage and Tom Shanklands W Delta Z and nothing in those films would have been harbinger for ‘The Children’. Its been compared to ‘Who Can Kill a Child’ and in some ways the comparison is apt as it involves children slowly succumbing to some unknown cause that turns them violent towards adults. ‘Who Can Kill a Child’ was more involved in creating suspense in the unknown and questioning the idea of violence against children. ‘The Children’like the recent ‘Grace’ more or less involves parents and their children and the lengths people will go to protect their offspring even when those kids might have set up a trap for an adult invovling sleds and gardening equipment. This might be a big statement but its one of the best British horror films since The Descent.

Two families come together before Christmas carrying their children to a remote area in the woods. Slowly with one event the children start showing signs of sickness. The parents however are too self absorbed in their own problems complicated by teenager Casey whos acting rebellious flirting with her uncle and trying to hide a tatoo from her parents. Slowly though things begin to change. There are hints but things are never clear until the first fatality. Then the adults are scrambling around looking for their children while Casey begins to suspect the truth trying to warn adults who only want to protect their children even if those kids are coming at them with a pair of scissors.

‘The children’ as it is is a slow burn of a film that is more about tension and suspense than gore. The gore is still there in flashes and glimpses. The kills are brutal and effective as they’re happening to characters who are well defined and acted. And unlike ‘Who Can Kill a Child’ I’ll admit even the violence to the little tykes was unnerving without feeling exploitative. This is an excellent film a great addition to the new Ghost House Underground series.
Movie Quality: 8/10

The print is presented in 1080p/AVC MPEG-4 with a 1.78:1 aspect ratio. I found colors to be a bit more vibrant than the rest of the recent Ghosthouse releases, but there was still that softer color pallete which almost looks like a film filter. It appears that in many of their films maintain a darker color look/feel. Details are decent and better than DVD, but not the greatest in high definition.
Video Quality: 6/10

The audio is presented in DTS-HD MA lossless 5.1 mix. The soundfield is just right for this film as it presents a spectacular sense of atmosphere. Sound effects such as screams, banging, and broken glass sounds so crisp in the soundfield. The panning effects across the rears add to the atmosphere making this a creepier film. Dialogue is on the lower side which is a problem to me.
Audio Quality: 7/10

‘The Children’ is the best of the Ghosthouse 2009 releases. This is a film that takes us back to the old days of atmospheric horror films. I enjoyed this film and highly recommend it to those that want something different in their horror films. On Blu-ray the image is a bit on the disappointing side in some areas, but the audio helps make up for it.
Overall Rating: 7/10