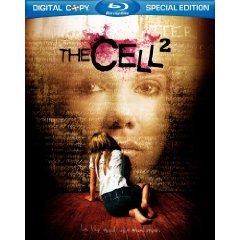 This straight-to-DVD sequel to the 2000 Jennifer Lopez picture must play its mind games without Lopez herself. But the idea’s still intact: another telepathic mind-melder (played by Tessie Santiago) is employed by the police to get into the brain of a serial killer. She’s been clinically dead six times or something, and can “see” in a way others cannot. She was herself once held by the madman, who has figured out a way to wipe his face out of her visions of his dark, torture-filled world. Where the original film directed by Tarsem (the music-video veteran and maker of The Fall) at least provided some gaudy visuals for the already-tired premise, The Cell 2 has 24 producer-director Tim Iacofano at the helm. The sense of overheated episodic television prevails, although the acting can charitably be described as beneath the level of an average TV show. (The exception is the villain, after he’s unmasked, but those kinds of roles reliably provide opportunities for mustache-twirling shenanigans.) One begins to miss the old-fashioned simplicity of a normal mad-killer movie; now you’ve got to keep straight how each scene alters the memories, or unconscious minds, or the ability to foretell things, or… see, already we’ve lost track.

There are way too many low budget direct to DVD horror/thriller films as of late that it is becoming too saturated of a market. The problem here is that ‘The Cell 2’ has none of the elements that made the first one intriguing film albeit its own flaws. A lot of the mystery, suspense, thrill ride, and visual flair of the original is gone which makes this film somewhat flat. Not even the acting can really save this film which isn’t all that great itself.

If you are a fan of the original film and yes there are a lot of you out there, you may be disappointed by this film and the franchise’s direction. Then add that in the first film we had Jennifer Lopez as the lead as she was in the killer’s head. While I am not a fan of Lopez, her acting was sufficient enough to make the film watchable. Here there are no real talent that can carry the load and even Santiago whom resembles Lopez does not pull off that task because of the horrible dialogue that she has to work with. At times in films, if the plot is bad but decent dialogue it may hold some of your audience over till the end.

The print is presented in 1080p/AVC VC-1 with a 1.85:1 aspect ratio. This is a film where I am surprised by the video quality bounces around from colorful to soft. I found the image to be much softer though. Black levels are passable but appear too blotchy. This ends up hurting most of the details in the film, especially scenes where the camera pans. The biggest problem is that both DNR and EE is present which ends up also making fleshtones look unnatural.
Video Quality: 6/10

The audio is presented in Dolby TrueHD 5.1 mix. The mix is fairly immersive with some accurate bass levels. You do hear all kinds of effects in the surrounds that come through very loud and clean. Dialogue is also very clear with no issues making this a well balanced mix.
Audio Quality: 8/10

The film only has 1 special feature in standard definition.

‘The Cell 2’ is not like the first film featuring Jennifer Lopez where it was an intriguing thrill ride with artistic atmosphere. With the lack in video and special features, this does hurt the Blu-ray. I don’t know if I could recommend this film to even fans of the original film.
Overall Rating: 5/10