The Boys Are Back DVD Review

Posted in DVD Reviews by George Theofanopoulos on 26 January 2010 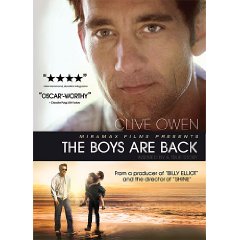 Clive Owen delivers a critically acclaimed performance in THE BOYS ARE BACK, the heartwarming and uplifting drama about a man who is suddenly thrust into the role of single parent. Successful sportswriter Joe Warr (Owen) finds himself completely unprepared to raise his rambunctious 6-year-old son Artie and juggle the challenges of a demanding job, running a household and the possibility of romance. Determined to bring joy back into their lives, he develops a revolutionary approach to parenting no rules, no chores. It’s a home filled with love and chaos and then Joe’s estranged teenage son comes for a visit. Inspired by a true story and filled with emotional honesty, this poignant film will touch your heart and lift your spirits.

“The Boys are Back” is the pretty common story of Joe Warr (Clive Owen), a British sportswriter who now lives and works in Australia, writing about sports for an Australian newspaper. He moved to Australia because he fell in love with his current wife and they had a child. Now a single parent, Joe finds himself trying to adapt to caring for his young son (played by Nicholas McAnulty). After a bit of time mourning and learning to care for his young son, he gets a call from his older son, Harry (George MacKay) who lives in England, with his mom, Joe’s first wife. He wants to come and visit. Initially, Joe is a bit amazed at the timing, but realizes he and his older son must have some needs that aren’t being met. Joe soon finds himself the adult in a household gone mad, but this is how he prefers it; there are few rules and even less discipline and he hopes this will allow for the ultimate amount of bonding, healing and love. There are complications, but these only serve to push everyone closer together.

There is really nothing remarkable about the story behind “The Boys Are Back”; single father has to adjust and begin caring for his two sons. In fact, if the parent were a mom, this would make the perfect material for a Lifetime Channel movie. A bad Lifetime Channel movie. But because the director is Scott Hicks and he is working with Clive Owen, an actor who is clearly at the top of his game, and two young actors who are really quite amazing, the film becomes extraordinary and moving and memorable.

Owen makes the role of Joe Warr seem effortless, as though he is a British ex-pat living in Australia, working for a major newspaper as a sports writer. It all starts with the few scenes we watch between Joe and his wife. Joe is clearly in love and misses every moment he is away. It is even more shocking for us as we watch him react to her suddenly dropping to the floor and our heartbreaks as Joe cares for his ailing wife. Owen is playing a fairly common guy so it seems even more remarkable that he is able to make the performance seem so good. As he watches his wife die, he realizes his young son may need some help coping, but the little guy seems like any other young kid; unaware of the problem and the severity of what is going on.

As Owen portrays this character, we understand his struggles and the problems he is experiencing. He receives a call from his first son, who wants to come and visit from England. The look on Joe’s face says it all. This is not a good time and he really wants to tell him that, but how do you tell your son that? So, he agrees to the visit. Soon, Joe and Artie arrive at the airport to meet Henry.

There is a lot of Oscar buzz surrounding Owen’s performance. And it is richly deserved; he is that good. And because the film basically tells the story of a normal guy coping with a death, the fact it is so memorable is even more remarkable.
Overall Rating: 8.5/10