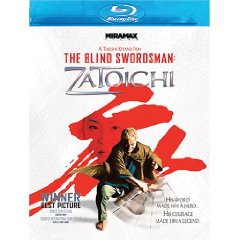 ‘The Blind Swordsman: Zatoichi’ stars Japanese screen legend Beat Takeshi in an action-packed, award-winning film that has been compared to “Kill Bill Volume One.”

Takeshi Kitano does another take from the Zatoichi series and adds alot of humor into the mix along with the drama and action. A retelling of the Zatoichi samurai epic, the blind master swordsman and masseur Zatoichi played by Takeshi Kitano finds himself in a town in fear of a gang that is in control of everything, he gets to defeat the gang and has a final confrontation with the final tough bad guy.

Zatoichi also befriends a local old woman and her nephew who seems somewhat like a coward and fumbling idiot but is a nice guy, there is also a subplot involving two orphaned geishas who had a hard time growing up as one of them had to be a prostitute to survive they want revenge for the death of their parents.

The film definently has bizzare scenes as some farmers seem to dance for no reason and make music that has a rythem to it like with their farming equipment and that weird ending, the blood and violence was similar to Kill Bill but it seems like they used CGI, it all seems like Kitano wanted to do this with his own style and sense of humor I guess.
Movie Quality: 9/10

The print is presented in 1080p/VC-1 with a 1.85:1 aspect ratio. This print is nowhere near as problematic as “Legend of Drunken Master”, but it has some huge contrast issues. The color palette is way too overblown albeit the film still having a strong set of colors. Black levels are great offering deep levels. Then there is the issue of the dreaded Edge Enhancement, which is all over the print. Then add DNR in the mix making this film way too processed for its own good. If you are a diehard fan of the film these issues may not disappoint.
Video Quality: 6/10

The audio is presented in English DTS-HD MA lossless 5.1 mix. Many will be disappointed here that the original Japanese language track is only available in Dolby Digital 5.1 mix instead of a lossless track. The audio mix was not as aggressive as I would have expected, even though its more of a dialogue driven film. The issue here is that dynamics and speaker panning was missing throughout the film. Dialogue through the center channel was clean and crisp with no apparent issues.
Audio Quality: 6/10

Takeshi takes a well known character and without changing the feel of the character, he gives him a vivid personality that comes out well on the screen. While the video and audio are not the greatest on Blu-ray, they are definitely better than the DVD. Fans may not be disappointed and this is well worth checking out.
Overall Rating: 7/10