Late one night, Los Angeles private investigator, Ned Cruz (Antonio Banderas) gets a visit from a recently paroled Russian boxer with an intriguing job offer: find Lexie, his missing girlfriend and the 30-million dollar stash of diamonds she’s hiding. As Detective Cruz sets out to find her, the clues send him into the city’s seediest corners, from a Hollywood action star with a dirty little secret (James Van Der Beek), to an enterprising porn producer who takes a personal interest in his own work (Snoop Dogg), and a kinky waitress with an unusual fetish for particle physics (Autumn Reeser). Lexie proves to be as elusive as she is beautiful and Cruz becomes obsessed with finding her. With time running out, Cruz discovers the trail leads to reclusive billionaire (Sam Elliot), and his physicist (Jimmi Simpson), intent on recreating The Big Bang underneath the New Mexico desert. Tailed by a trio of cops also looking to find the missing diamonds, and with the body count piling up, Cruz soon realizes that what appeared to be a standard missing person’s case is anything but, and could quite possibly bring about the end of the world as we know it. 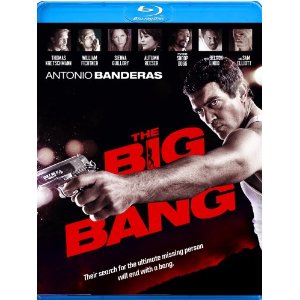 Visually fascinating, ‘The Big Bang’ is an uncredited, updated rip-off of Raymond Chandler’s Philip Marlowe mystery, ‘Farewell My Lovely’. The plot outline and characters are virtually identical to Chandler’s classic film noir, and director Tony Krantz even “borrows” some memorable touches from Edward Dmytryk’s 1944 filming of the story, ‘Murder, My Sweet’.

Among the many problems with ‘The Big Bang’ is that Krantz and screenwriter Erik Jendresen have decided to update the Chandler story at all. The novelist’s stories are set in 1930s-1940s Los Angeles, and that’s where they belong.

The filmmakers have added a few new twists to the mystery and, worst of all, they’ve now tied the solution into “The Big Bang Theory,” which results in the audience being subjected to a raft of talk about physics in a movie that is already burdened with stilted dialogue.

Antonio Banderas plays the honest private eye who is hired by a big palooka to find the stripper girl friend that disappeared while he was serving a jail sentence. Also in the cast are Sam Elliott, Delroy Lindo and several other good actors who, in all probability, did their roles for the paycheck.
Movie Quality: 7/10

The print is presented in 1080p/AVC MPEG-4 with a 1:85:1 aspect ratio. Color is vibrant and bold in this transfer. A very good example of that is the color red, when blood splats on the floors, walls, and in the air. The film is so colorful that it is very good in details. There are also moments though where the transfer does lack in a few areas. Lighting was a problem in a few scenes where there appeared to be too much light in the background.
Print Quality: 9/10

The audio is presented in a Dolby TrueHD 5.1 mix. This is a demo worthy mix that could easily sell those on the fence about the format. The soundfield is immersive at all times no matter if it is the special effects or dialogue. I was literally amazed with the amount of bullets panning from each speaker in the rears. It sounded as if there were bullets ricocheting off of the walls in the room. Bass was punchy as it shows with the amount of gunfire and explosions. Dialogue is also well placed in the center channel sounding crisp and clear. The best part of this all around aggressive soundtrack is that it is well balanced between the dialogue and sound effects.
Print Quality: 9.5/10

I would recommend it to those that like a different type of movie. This is defiantly not for everyone, but it’s worth checking it out.
Overall Rating: 7/10